A Life of Danger

There’s a man who leads a life of danger; To everyone he meets he stays a stranger; With every move he makes, another chance he takes; Odds are he won’t live to see tomorrow. 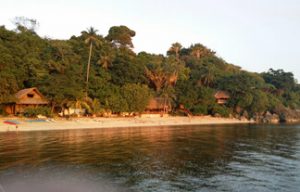 Ok, fair enough, it’s not quite like the song, but due south of this bamboo hut, my home now for days, lies Mindanao, thirty miles across the Sulu Sea, beyond Tambobo Bay at the southern tip of Negros. Mindanao rises there, beyond the bay, like low clouds on the tropic horizon, barely visible on a clear day. Stories emerge from that island, the kind Johnny Rivers never sang about, from Dipilog City and Zamboanga—about kidnappings of westerners held for ransom by brutal thugs and Abu Sayyaf terrorists. And farther south and west the stories and videos get more grisly, where in November Abu Sayyaf not only kidnapped but beheaded a Filipino official on an isolated island of the Sulu Archipelago, their eighth such act of barbarity in 3 years. The infamous Abu Sayyaf actually claims some of those islands as their own, and the main town here in Negros Oriental, Dumaguete, eerily bears witness to their tradition, being derived from the Visayan word for kidnap—pirates of old having waited off shore for opportunities to make off with hostages and hold them for ransom, usually women.

Here in this peaceful cove, where fishing boats lazily motor by at dusk and dawn, and schools of fish dart from the sea at sunset, life rolls along, like the boats, at a languid and uneventful pace. Danger is not a concern, though the bamboo walls of this hut offer no barrier at night to the sounds of creatures rummaging in the foliage—geckos, a rat or two, streams of tiny ants (you get used to them), and creatures of another kind imagined at 3:00 a.m., as a mysterious boat enters the cove and stays until dawn, but without incident.

Last September, not so far from this spot, but buffered by sea and coral, the terrorists abducted two Canadians, a Norwegian resort owner, and his Filipina wife, but it might as well have been a world away (one hopes), and as the sun rises the major questions of the day remain—to kayak or snorkel, to shave or not? Kayak it is. West, not south.

Still, you’d think the decision to briefly call this hut home amounted to a death sentence. That’s not far from Dipilog, they’d say, and it’s true, but nobody boats across the straights to kidnap people in bamboo huts, right? And kidnapping is statistically rare in Mindanao anyway. That’s what you tell yourself.

Mention just about any part of the world these days, where the dollar buys three times more than it does in Montana, the kind of places that interest adventurous writers, and you’ll find alarming negatives—murders and beheadings in Mexico, where the bodies of two Aussies were recently found immolated in a van. Or Honduras, Roatan in particular, where you’re advised not to walk the beach at night for fear of being chased by machete wielding bandits. Same on Lombok, west of Bali, offering some of the most beautiful beaches in the world, but travel blogs warn of machete wielding Muslim natives there too (perhaps written by surfers trying to preserve the place for themselves). Belize, as well, one of those idyllic but run down locales (Ambergris excepted), claims the highest murder rate in Central America. And what about the Croatian riviera, Dubrovnik, probably the most affordable picturesque town in the world? Don’t know (it’s on my list), but look hard enough and you’ll  find a reason not to go there—too close to Bosnia. Still, I’d rather die with my boots on than stay home watching tv my entire life (except Homeland, can’t wait for season six).

Then there’s Paris, San Bernardino, Chicago, anywhere you go, bad news. Seems the whole world’s a danger zone. (Or is it?)

In Gallatin County (near this publication’s home base), bad things happen too, and to travelers.  They don’t get kidnapped or beheaded (maybe in Logan—that’s a joke), but Sheriff’s Office press releases tell us about frequent accidents, injuries, rescues, and even fatalities resulting from people stepping out of their safe zones via ATVs, snowmobiles and skis.  Then Park County had a recent death—by avalanche. Yet people still ski, ATV, and snowmobile. And they come to Montana.

Driven the Bozeman Pass lately as black ice descends on a winter evening? Camped, hunted, or hiked in grizzly bear country? These can be lethal activities.

Danger is part of life. 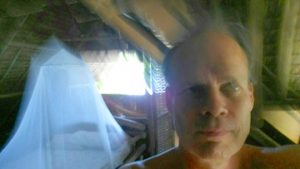 The relative safety of a bamboo hut.

So, here in this bamboo hut (full disclosure: I have a bathroom and wifi), thirty miles from an occasional kidnapping and hundreds of miles from Islamic separatists, there’s relative safety. And irony of all ironies: zero stress, paradisiacal beauty.

A few feet from the hut, just off the beach and hillside jungle, submerged coral crags stretch a few hundred yards ripe with rainbowed fished I cannot name, royal blue starfish, harmless sea snakes, and mercifully, no jelly fish or sharks (not today). Take reasonable precautions, of course, ask around about the jelly fish, sea urchins, and sharks. Ask about go-fast boats too, piloted by terrorists, based on accounts from the archipelago. No, they say, not here, and low brows like me in bamboo huts hardly present an attractive prize. So, have at it, spend your day snorkeling, diving—or kayak to the fishing village of Tambobo just around the point where you might even find a beer. Put aside thoughts of danger because there’s danger getting out of bed in the morning, the one in my hut draped with mosquito netting (that whole dengue fever thing) and the one in Montana where you could get mauled by a grizzly (that whole endangered species thing).

Why do you wanna go to a place like that? someone asked. Again, they’re spooked by news reports, and State Department’s warnings—avoid the archipelago (did that) and Mindanao (did that too), and specifically Dipilog City (yet if you go to Dipilog chances are one in ten million anything would happen, so maybe next time it’s Mindanao, even Dipilog, or Zamboanga in the infamous south). Above all, stay out of those islands in the Sulu Sea, the politically autonomous Muslim strongholds of the Abu Sayyef (what’s left of those murderous bastards), the MILF (the Moro Islamic Liberation Front), and the MNLF (the Moro National Liberation Front), if you value your head. Seriously, they have beheaded numerous people, foreign and native.

But in reality, other dangers are more likely to harm you here, in Negros—driving in the nearest city at night remains a high risk adventure (and an acquired skill), especially on a motorbike, a prime mode of transportation. Just got a facebook image of an expat dead on the National Highway, sprawled and bloody, his bike beside him. But such things are rare and avoidable—don’t drink and bike.

Breathing the exhaust, the carbon monoxide these bikes, trikes, and buses churn out day and night remains another danger (news flash: carbon monoxide kills you, carbon dioxide is harmless. Yet when they talk about carbon, they only talk about the harmless kind). How much carbon monoxide do you actually want to put in your lungs, bloodstream, liver and brain in the course of a day? But such dangers don’t make the news. There’s no blood spilled, and no establishment grants funding research, and lifestyles, based on a theoretical apocalypse due to carbon monoxide (you get what you pay for). Some of those grant writers ought to try riding a motorbike, in traffic, in the Philippines (breathing the exhaust). Then maybe they’d determine what’s dangerous, and what’s plant food.

It’s hard to say where this leads (maybe a tax write off), but staring into the eyes of passersby 10,000 miles from Montana, at a place called Siaton filled with a multitude of dark Asian faces on the Festival of Saint Nicholas, when you’re the only white man in town, and among people who have come down from the hills for the celebration, their indigenous culture fused with Roman Catholicism, to absorb a rhythm of humanity you never felt, or knew existed, seems worth the risk. Beware though, they will tell you not to go there because they heard something on the news. You might never come back, so register with the State Department, don’t drink the tapwater (really, don’t), watch out for thieves, wear a money belt…

Beware indeed the greatest danger of all, never taking the chance, a life unlived. What if you were given life so you could experience it? What if that were the meaning of life, but you didn’t bother—wouldn’t that be death, and isn’t the purpose of avoiding danger to avoid death? Doesn’t mean you have to explore the Sulu Archipelago (and actually flirt with death). But if you’re up for it, maybe another locale, we can go together, you and me, because who wants to die alone?

As far as never coming back, one day, that’s a given anyway.

Note: On December 23, 2015,  eleven days after my return to Montana, the U.S. Embassy in Manila issued a security alert for U.S. Citizens titled: Reports of Increased Security Concerns in the Philippines, that included not only the usual danger zones in Mindanao, but Boracay (a popular tourist destination farther north) and the area of the author’s bamboo hut, southern Negros. Apparently, a text had been intercepted that revealed possible plans to target westerners in the areas mentioned. The relevant part of the release reads:

The U.S. Embassy would like to alert U.S. citizens residing in, or traveling to, the Philippines to recent statements by Philippine security officials regarding an increase in the Terrorist Threat Level to Level III (High) in seven cities and nine provinces across the country due to persistent reports of kidnapping for ransom plots and potential bombings by the Abu Sayyaf Group (ASG) and the Bangsamoro Islamic Freedom Fighters (BIFF).

Philippine security officials indicated that cities under the increased terrorism alert are Zamboanga City, Marawi, Isabela, Kidapwan, Dipolog, Dapitan, and Cotabato. All are located in Mindanao.