Capturing the Big Sky From High Above 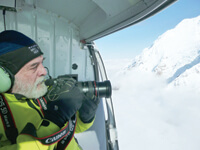 Imagine hovering above Yellowstone National Park, and the world’s natural treasures in the most remote areas, where humans rarely travel. Like a bird of prey circling its quarry, you look down upon the landscape, see how it all fits together—from on high, yet close enough to the ground to take in the details.

This is the view from a helicopter, Mark Taylor’s office in the sky.

For Taylor, founder of Rocky Mountain Rotors, flying helicopters is about freedom and exploration. It’s about seeing wildlife in their natural habitat and discovering hard-to-get-to places.

Moreover, it’s about sharing those experiences with others.

“In 30 minutes, I can have you in the most remote area you can imagine. In an hour, it would blow your socks off,” Taylor says.

Located in Belgrade at Bozeman-Yellowstone International Airport, Rocky Mountain Rotors services the tri-state area of Montana, Idaho and Wyoming. Taylor’s hired out for a range of services, from search and rescue operations, to wildlife surveying, to real estate flights and cattle mustering for ranches.

Most frequently, he takes clients out for charter work, aerial photography and film projects.

On average, Taylor flies 200 photographers annually who travel to the Gallatin Valley from around the world to see our national parks and other features from above. He is also one of only 16 U.S.-based pilots in the Screen Actors Guild—an often required status for commercial film work.

Taylor’s notable high altitude film projects include working the Johnnie Walker commercial that aired the night of the Presidential election in November, and flying Ben Affleck, as Bruce Wayne, in the opening scene of Batman v Superman: Dawn of Justice.

While Taylor regularly takes clients out for photography tours above Yellowstone, the Federal Aviation Administration restricts aircraft to 2,000 feet when flying above national parks. For the Nat Geo project, a temporary permit allowed him to hover as close to the ground as needed to document the park.

Taylor got to see things no one else has seen, and may never see again.

“They told me they will never issue this permit again,” Taylor said, clearly feeling both privileged and proud to be a part of such a rare opportunity.

A few of Nichols’ YNP aerials from the Nat Geo project hang on the entryway walls of Rocky Mountain Rotors. One of those shots reveals a grizzly bear, lying on top of a bison carcass in the river. It brings back a thrilling memory for Taylor, as he recounts how the giant grizzly easily scared off the other bears with his size, and how he slept in the river, protecting the carcass.

Taylor told us about another of his favorite photos, Yellowstone’s Grand Prismatic Spring shot by Bozeman-based photographer, author, and businessman Steve Quayle, who has one of the largest photography collections of Yellowstone National Park, shot over the last four decades from both from the ground and the air.

As Taylor goes through the photo gallery, explaining where each photo was taken, he describes them with an infectious passion and enthusiasm. It’s clear he’s proud to have played a part in capturing these striking images.

And rightly so, according to Quayle.

Originally from Bozeman, Quayle, 65, graduated from Montana State University in 1973 with degrees in photography and cinematography.

“I’ve pretty much transitioned from being a land-based photographer to an aerial photographer, and I do it all over the country,” he says, adding that he spends 20-40 hours of every year shooting from a helicopter.

When photographing southwest Montana, Quayle prefers Taylor as his pilot, because he understands where photographers need to be to get the right shots.

Quayle recognizes that this is no small feat.

“I attribute a lot of my best work to being able to have a helicopter pilot that can station or position me in reference to whatever it is I’m going to shoot, whether it’s mountains, whether it’s animals,” Quayle said. “Whatever it is, a pilot is the quintessential determining factor, and communication between the pilot and photographer are of the essence.”

Photographing from helicopters presents other challenges, such as variable temperature, weather, and the performance of the chopper, Quayle explains, adding that most people forget how much the temperature changes from sea level to 10,000 feet.

A proud Montana native, Quayle believes his home state can’t be truly admired without seeing it from the air.

“You cannot appreciate Montana even on horseback,” he says. “You can’t see all of, for instance, the Beartooth wilderness area. It’s just impossible. There’s 300 lakes there, 25 peaks exceeding 12,000 feet, small glaciers.”

While each geographic feature demands respect in its own right, seeing them together—in relation to one another—is essential for Quayle.

Yellowstone ranks as one of the most photographic and beautiful places in the world, but without aerial photography, Quayle tells us, a person doesn’t have a feel for how all the elements fit in position to one another.

“The purpose of aerial photography is to basically establish and show people a reference to not only how big something is, but how beautiful it is, so when they go by car they get a feel for where they’re at in relationship to the larger area.”

In this sense, both Quayle and Taylor are working together as aerial tour guides, finding a way to share their vantage point with others.

In just the past five years, drones have changed the film industry. Prices for drones have dropped, and they are now in the hands of more hobbyists than ever.

These spacecraft-like machines bring both rewards and challenges.

For film producers and photographers, drones offer high quality establishing shots at an affordable price. No longer is a helicopter required, which can cost upwards of $2,500 per hour.

Drones provide a professional effect that was beyond the realm of most filmmakers until they were invented and introduced onto the market, said Quayle, who also owns a documentary film production company called GenSix Productions.

Quayle’s crew uses drones to capture documentary footage. However, he makes it clear that there is no comparing drones and helicopters.

“A drone is localized, and a helicopter is long distance,” he says. “Only a helicopter can provide an aerial platform for giving the best photographs of an area that you cannot get from the ground.”

And drones come with other restrictions: It’s illegal to fly them over national parks, and they can’t carry a lot of weight.

When a tourist crashed a drone into Yellowstone’s Grand Prismatic Spring in August of 2014, he ruined it for every commercial photographer, according to Deny Staggs, CEO and Executive Producer Vision Hawk Productions, a blue chip wildlife film production company based in Bozeman.

Prior to working at Vision Hawk, Staggs served as the film commissioner at the Montana Film Office in Helena.

“When I was at the Film Office, we were working really hard on creating standard practices for remote aerial photography,” he said, adding that the U.S. is behind the curve when it comes to rules and regulations.

The FAA now requires drone owners to get remote pilot certified before they can operate the device.

While drones are becoming more and more advanced, they can only carry so much. At Vision Hawk, they need helicopters to carry the weight of their high-tech, heavy setup. The company owns the most high tech gimbal setup in Montana, if not the tri state area. The motorized gimbal allows the camera, which can weigh over 100 pounds, to remain stable as the helicopter moves.

“There’s no drone in the world that can fly that,” says Taylor, who also works with the Vision Hawk team for commercial shoots, like the Johnnie Walker commercial. “No drone can pick up a camera that weighs that much.”

While drones have become more common, Taylor says they have not hurt his business, simply because they can’t do what a helicopter does. They can’t get to remote areas the way a helicopter can. They can’t fly over national parks. They can’t carry the high-resolution, heavy lens and stabilizers. They can’t replicate the sensation one experiences while in the air.

Drones, though, have affected the safety of his job and the lives of the people who ride with him.

Taylor has no problem with responsible drone operators abiding by the FAA’s rules and regulations. It’s the reckless novice who presents a danger to him in the air. He urges people to get certified.

Taylor may feel more strongly than others about the potential hazard drones pose, but safely taking people like Quayle up in the air is his job. Behind-the-scenes, he and Quayle work high in the sky, behind a flight control dashboard and camera, flying through spaces previously left to the imagination, recording what they see. They keep finding a way to get back up there, taking others with them, then share what they discover with the world.