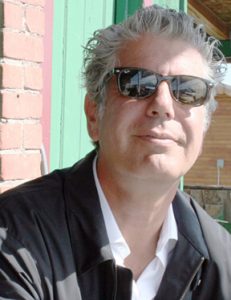 World-famous chef, author and television personality Anthony Bourdain was back in Montana recently, filming a new episode for his CNN Parts Unknown documentary series that will highlight various locations culinary and otherwise in Big Sky Country.

The last time Bourdain visited the state was on a “working” trip in 2009, when he filmed a Montana episode for a similar documentary series, No Reservations, which aired on The Travel Channel until 2012.

“When I look back on my life and career…I’ll look back on the Montana [No Reservations] show with no small amount of pride,” Bourdain wrote in August of 2009. “I will smile and be proud that I had the honor, the privilege, the sheer joy of having Jim Harrison on No Reservations…I’ll be grateful that a painting by the awesome Russell Chatham now hangs on my wall. That the fishing guide, wilderness cook, jack-of-all trades Dan Lahren showed me around. And that I got to spend many happy hours drinking at one of the world’s finest saloons, The Murray Bar.”

Bourdain was back in that immediate neighborhood this time around, too, staying at The Murray Hotel—in the Peckinpah Suite, to be exact.

“I wake up in a lot of hotels, so I am fiercely loyal to the ones I love,” Bourdain said in a post on his Facebook page on Dec. 7. “A hotel where I know immediately where I am when I open my eyes in the morning is a rare joy. Here are some of my favorites.” And in the accompanying list of his 10 favorite hotels in the world that included notable establishments like the Chateau Marmont in Los Angeles, Le Continental in Saigon, and the Park Hyatt in Tokyo, the Murray was listed.

“You want the Peckinpah Suite,” Bourdain wrote regarding the Murray.

Originally called the Elite Hotel when it was first constructed in 1904 by Joseph Kline to accommodate railroad passengers riding the Northern Pacific Railway, construction of of the Murray Hotel was financed by the family of a future U.S. Senator from Montana, James E. Murray. The railroad brought a variety of patrons to the hotel, renamed when Senator’s Murray’s family acquired the hotel after the original owner went broke,

Dan and Kathleen Kaul have owned the historic hotel since 1991. The hotel boasts 30 renovated suites adjacent to the Murray Bar, the 2nd Street Bistro, and Gil’s cafe (all under separate ownership from the hotel). The Murray lies in the heart of Livingston’s historic district, right across the street from the old railroad depot.

“We’re flattered and excited that we made the list,” Dan Kaul said. “Anthony and his crew are always great guests and we’re happy to host them.”

“We’re proud to be a part of downtown Livingston,” said Kathleen Kaul. “We like that Livingston is a real town, one that embraces the best of the Old West and the New West. That’s what we do, too. Even cowboys like big fluffy pillows.”

Along with the Murray, Bourdain targeted the Yellowstone Valley Grill in the Paradise Valley and The Mint Bar in Livingston for this Montana episode of Parts Unknown. The Mint’s owner, Merlin Moss, told the Montana Pioneer that he thinks Bourdain is a great guy.

“He spent about two hours here with us,” Moss told the Pioneer. “It was very low-key—they wanted what they were shooting to be in as natural a setting as possible. Our conversation mostly revolved around land use and access in Montana.  He’s a really nice guy. His crew was cool, too.”

Moss said that the new Montana episode of Parts Unknown will air on CNN in March.

“I’m excited about the business it will bring,” said Moss.