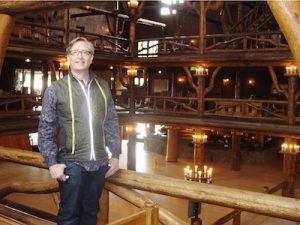 An old hat, a piece of broken stained glass, a wobbly chair. Upon first glance, all these items appear worn and useless. One might even mistake them for junk.

After all, these are all just things—and things that may not provide much practical use in today’s world. Your kids wonder why you keep them. That is, until they hear the stories behind them.

These stories are what celebrity appraiser Tim Gordon from the popular PBS series Antiques Roadshow lives for. The worth of rare, unique objects can go unnoticed simply because the owner does not know the appraisal value of those objects. Most people, in fact, do not.

The appraiser on the other hand, has developed an eye over the course of his life for what is excellent and what is mediocre.

“You have to have seen, touched, sold, bought, and worked with that kind of material,” Gordon told the Pioneer. “That’s how you develop the eye to recognize quality, craftsmanship and history.”

Gordon, a native of Missoula, has been collecting and dealing since age eleven. He primarily collected Montana objects when he was younger, but has since gone on to appraise millions of objects, including Princess Diana’s gowns, the Ronald Reagan Ranch, the Yellowstone National Park Collections, and Ansel Adams photographs.

On Saturday, May 13, Gordon and Grant Zahajko, also with Antiques Roadshow, valued items for the public at the Montana Antiques Appraisal Fair, held at the Gallatin History Museum in Bozeman and co-hosted by the Montana History Foundation.

The highest appraised item at the event, a 1933 painting by Jessie Wilcox Smith, sold for $120,000. According to an article published by ABC Fox Montana, the painting belonged to Greg Beardslee, Smith’s great nephew, but Beardslee hadn’t a clue as to the price it might command.

“There’s a fascinating story in the collecting of objects,” Gordon said. “They enrich lives. That’s the beauty of appraisals.”

While Gordon has examined objects from all over the world, he maintains that Montana is home to some of the most interesting antiques.

“In Montana, in particular, old artifacts carry tremendous stories that offer a narration for our country and how we fit into the big picture,” he said.

According to Gordon, Virginia City and Bannack figure as the Old West’s biggest story. However, because events in these old mining towns took place during the Civil War, their stories weren’t written down and often got overshadowed by the events of the conflict.

For instance, the ten to 20,000 miners at Virginia City’s gold camp fascinates Gordon.

“They were all of Northern or Southern sentiment, and yet they all got along,” he said. “And that’s just one little piece of the picture of our heritage. You just have wave after wave of Type A people getting out of the East and looking for adventure in the West…the kind of people who are adventurers and seekers of fortune and seekers of freedom.”

Although Montana was sparsely populated at that time, just about everybody found themselves involved in something historically seismic. Over a relatively short period of time, the trade, steamboat, and gold mining eras arrived. Then came the building of cities and the influx of homesteaders, followed by the oil and cattle industries.

Consequently, objects left behind by these people can have great stories to tell.

“What’s interesting is when you’re dealing with material from pioneers, an outlaw’s hat, for instance—these artifacts (carry with them) this legend and lore,” Gordon said. “They seem small and temporal, but the person who used them was involved in such an incredible historical event, that it makes that piece extend beyond its shape and form.”

While each day at the job differs, and brings fascinating, surprising objects, Gordon says one of the most interesting things he has come across in Montana was panels of stained glass he found when appraising the contents of Nevada City and Virginia City, said to be home to nearly one million artifacts related to Montana history. Every day, then, Gordon discovered a new favorite.

On one memorable day, Gordon looked through some box cars that were owned by the Bovey family. At first, he found nothing but panels of broken stained glass inside, but, with research, he discovered that the panels had adorned the barrel vault ceiling of the Montana State Capitol building.

Since then, the state restored the glass and returned it to the Capitol’s vaulted ceiling.

“I’ve seen a lot of incredible things, and the barrel vault ceiling is one,” Gordon said. “What’s neat…is that it was just found in sheets of stained glass in a train car in Nevada City with a whole bunch of pack rat [droppings] on it. It was quite dirty.”

Montana artifacts often command higher values than those from other western states, according to Gordon.

“…I find that because of the fascinating story of Montana, that the Montana artifacts are always a bit more valuable than some of the other states in the West,” Gordon said, adding that he believes this results from Montana’s turbulent history.

“People collect according to the story,” he said. “The value is parallel to the magnitude of the story and the history behind it.”

Undoubtedly, the appreciation for and perception of antiques changes over time.

Millennials and Gen Xers want smaller houses. They live in a more digital world. They don’t want to accumulate stuff.

Gordon, however, sees this as a temporary cultural situation that will change.

“Everybody has the love for aesthetics, beauty and history,” he said. “It’s human nature to collect.”

Gordon also points out that it’s predominantly the more mediocre items that youngsters don’t want to clutter their shelves with, things that aren’t relevant to their lives. “They are, however, able to respond to rare, historic artistically beautiful things, and those things consequently are going up in value.”

So, while old chachkas, pottery and figurines may not command top dollar on eBay, artifacts of beauty and historic worth continue to appreciate.

The Internet, literally at our fingertips, makes learning about objects and their worth easier than ever. Gordon says technology helps uncover rarities while decreasing the value of more common things.

The items so many believed were rare, but were not, have surfaced on ebay. Consequently, the value of such things have tanked, Gordon told us. “But I think due to technology…and live auctioneers, there are tons of people who are reaching out and putting collectables and artifacts into the world,” Gordon said.

Every day Gordon dashes off to a new adventure—a modern day treasure hunt. “I get to play with all the super treasures and the good stuff,” he says. “Every piece of material…a painting …furniture…glassware…has an artistic aesthetic behind it.”

Gordon compares antiques to the book The Red Violin. Like the violin, antiques have a life of their own. And Gordon works as a detective, asking where an object’s been, who owned it, who created it, and what it was used for.