Just north of Cooke City, Montana, a stone’s throw from Yellowstone, blustery arctic winds blew across Henderson Peak in the Beartooth Mountains. Air temperatures hovered in the upper teens, as afternoon wind gusts of over 20 mph began to diminish by 3:00 p.m. Four skiers approached a slope dotted with trees, Sunday, Dec. 11, 2016, and one by one began their descent. Three safely reached the bottom, but before 55-year-old Christopher Peterson finished his run, every backcountry skier’s nightmare became a reality. An avalanche crashed down the mountainside, engulfed Peterson, and ended his life. 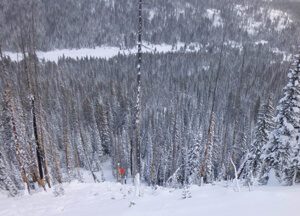 An avalanche can travel at speeds near 100 miles per hour, so by the time a skier or snowmobiler realizes what’s happening, it can be too late. A cold, opaque mass of white powder and ice descended on Peterson, as the torrent crushed down the mountain side in a swath 150 feet across at its widest. The remaining skiers, and two others who arrived at the scene, located Peterson using probes and his rescue beacon after about 20 minutes, according to Park County Sheriff Scott Hamilton. The deluge of snow had “strained” the victim through stands of trees on the steep slope (according to the Bozeman-based Gallatin National Forest Avalanche Center), then wrapped him around the base of a single tree, leaving him buried under five feet of snow. He likely died of trauma.

The trees on the slope where Peterson was skiing created hazards called terrain traps—boulders, cliffs, or trees that make potential avalanches even more dangerous.

Surviving an avalanche depends mostly on time. GNFAC places survival rates for those caught in avalanches at 80 percent for victims dug out inside of 10 minutes. By 12 minutes, the survival rate drops by half.

Suffocation kills seventy five percent of avalanche victims — that’s why rescue time is critical. But blunt force trauma kills the remaining twenty five percent, most often the result of hitting terrain traps, as raging walls of snow slam skiers into rocks or trees, or carry them over cliffs.

After the other skiers dug Peterson from the snow, and began CPR, the victim showed no signs of life. One of the group’s members made what must have been a panic-filled, gut-wrenching drive to Cooke City for help. Five members of the Park County Sheriff’s Search and Rescue team, dispatched from Cooke City, arrived on the scene and began their medical assessment.

The team used an Automated External Defibrillator, sending electrical shocks to restart the patient’s heart, but the AED soon advised the rescuers not to continue shocking the victim—he was gone.

A day that should have ended with laughter, warm drinks, and plans for future adventures instead left devastation that will forever alter the lives of the skiers and rescue personnel who lived through it.

After the remaining skiers left the scene, Search and Rescue staff assessed the area. But foreboding, tell-tale noises of unstable snow, described by the team as a “whumpf, sound, forced their retreat from the area. Whumphing, a technical terms used by ski patrol and avalanche professionals, describes the noise made by unstable snow layers as they collapse. The National Avalanche Center characterizes the phenomenon as “The sound of nature screaming in your ear that the snowpack is very unstable.”

Snow conditions continue to remain unstable in the area, and may remain that way for much of this winter, according to GNFAC’s veteran director Doug Chabot, who has spent the last 17 years heading up the Avalanche Center. After visiting the Henderson Peak avalanche site the day after Peterson’s tragic death, Chabot said that though the slope on which Peterson perished isn’t uniquely prone to avalanches, avalanches are quite common in the mountains around Cooke City. Peterson’s death is the twentieth avalanche fatality in this part of Montana since 1998. But most of the avalanche fatalities involve snowmobilers. Chabot told us more snowmobilers die in avalanches in the mountains around Cooke City than anywhere else in the United States.

When it comes to backcountry skiing and avalanche safety in Southwestern Montana, the Gallatin National Forest Avalanche Center provides life saving information. The Center monitors snow conditions throughout the mountains of the Southwestern corner of the state, a swath of land over 6,000 square miles in its entirety.

GNFAC experts travel into the field almost daily in winter to test and search for potential avalanche zones. They do not, however, make safety determinations for individual slopes. Chabot says that they are “broad brushing” in their reports. With an area as large as the one they patrol, and limited staff, it would be impossible to provide location specific details. Conditions remain generally predictable in a region from one mountain to the next, and, Chabot says, “Similar aspects at similar elevations have similar snowpack.” So if the snowpack is stable along a north facing slope at 8,000 feet on one mountain, conditions should be similar in other nearby mountains at the same elevation with the same physical characteristics.

Chabot explains that an avalanche requires four conditions to occur. The first two being, a steep slope, and snow on that slope; third—a layer of denser snow resting on a weak layer, and finally—a trigger. Triggers can be caused by several sources: new snow falling, wind moving snow, and the weight of a skier or snowmobile rider being the most common.

The most dangerous and common type of avalanche is a Slab avalanche. Slab avalanches occur when compacted snow lies on top of a weaker layer. The weaker layer is created by moisture migration due to temperature differences between two snow layers, leaving behind drier, angular-shaped ice crystals known as facets. These facets do not bind to each other well—you couldn’t make a snowball out of them—and allow the denser snow above them to slide when a trigger is engaged, causing an avalanche. Slab avalanches, the kind that killed Christopher Peterson, are described by the Utah Avalanche Center as a cohesive plate of snow that shatters like a pane of glass and slides as a unit off the mountainside. They can have devastating destructive power that kills anything in their path.

So, how to avoid becoming another avalanche statistic? First, pack the three pieces of equipment no backcountry skier should leave home without: a rescue beacon, a shovel, and a probe. Better to forget skis or poles than hit the backcountry slopes without these items. Along with these aids, skiers need to think about exactly what they are doing. Certain places on a mountain increase chances of being caught in an avalanche. GNFAC’s web site covers this with essays and videos that everyone should study before heading to the backcountry.

Ski in a group in areas with potential danger, but not at the same time. If an avalanche occurs while your entire group is on the hill, there will be no one left to dig out survivors. And the increased weight of several skiers on the snow could trigger a slide. But do not let the fact that several friends have already safely skied a questionable slope create a false sense of security. Remember, Christopher Peterson was the last member of his four man group to ski down the mountain. The snow held for the others. But not for him.

Montana teems with natural wonder. It’s why many Montanans choose to live here; to be immersed in the outdoors. But with outdoor adventure comes real risk. Each year, hikers, hunters and fisherman encounter wild animals—bears, lions, snakes—and sometimes those encounters end in tragedy. Boaters and swimmers sometimes drown. Skiers are trapped in thundering tsunamis of snow.

Every day in the mountains and prairies that make Montana so beautiful nature plays out in games of life and death. When Montanans enter that natural world they face the same potential perils. County law enforcement advises that outdoor enthusiasts take these risks seriously, that skiers and snowmobilers take precautions that will help ensure their survival.

As Doug Chabot said when he described how he and his team can so bravely enter the back-country amidst dangerous and unstable snow, “Risk is not zero in life in general.”

Paul Weamer is a Fly Fisherman Magazine contributing editor, author of several books, and the manager of Sweetwater Fly Shop in Livingston, Montana.