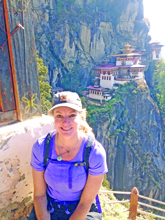 Located in the Eastern Himalayas, the Kingdom of Bhutan stands out as a place like no other. Roughly the size of Switzerland, rural and landlocked, the country is wedged between China in the north and India in the south.

Called “The Land of the Thunder Dragon,” the tiny Buddhist kingdom had been virtually untouched by modernity until just 55 years ago, when paved roads were first introduced to the country. And in an effort to protect Bhutan’s natural environment and unique culture, the socially and geographically isolated country did not welcome tourism until 1974.

Forests cover approximately 72 percent of Bhutan, and the mountainous landscape sees elevation changes ranging from 500 feet in the south to 24,770 feet in the north. Such a vast change in altitude means the climate also varies, with a hot and humid subtropical climate in the south, a temperate central region, and an alpine northern region.

“It has a fairytale quality about it that’s hard to get away from,” says Livingston, Montana, artist Amber Jean, who recently spent a month in Bhutan, working on a wood carving for the country’s fifth king, Jigme Khesar Namgyel Wangchuck.

Riding with her driver over the Chelela Pass, Jean describes the journey as other worldly, or perhaps like being in two worlds at once.

“You get to the top, and of course there’s a temple,” she says. “And then you’re looking at this amazing view of peak after peak of the Himalayan mountains. You start to drop down the other side, and you go like 22 kilometers, which isn’t very far, but now you’re in a tropical forest with monkeys crossing the road and poinsettias sixteen feet tall.”

She called her husband Raymond who was back in Livingston to share the experience.

Hearing tropical birds in the background, he seemed a little confused. She shared the sentiment, explaining how crazy it was that yaks were on one side of the mountain, and monkeys on the other.

Beyond the landscape, Jean also points out how different the road signs are in Bhutan. They read more like thoughtful poems than rules.

“You can’t get away from that kind of politeness, sincerity, jolliness—people just want you to be happy,” she said.

Bhutan measures economic progress by Gross National Happiness instead of the standard Gross Domestic Product, and according to Jean, it’s working.

“They are very happy people,” Jean says, explaining how they are constantly singing, no matter what they are doing. “They’re chopping wood and singing, doing dishes and signing, driving and singing. Gross National Happiness is true—it’s not just a marketing ploy.”

The jolly people, beautiful landscape and simplified, more present lifestyle created the ideal environment for the retreat-like experience Jean was hoping for, but also fearful of.

Jean’s acceptance of the Prime Minister’s invitation to carve inside a new retreat home for the King amounted to so much more than getting to travel and experience a new culture. She had made a public commitment to create.

Before stepping on the plane to Bhutan on November 8 of last year, in Jean’s mind, she was going to “Bhutcamp.” She had a number of personal hurdles to overcome if she were in fact going to carve for the king.

“Committing to this was a huge, risky, bold leap of faith, but it felt right on so many levels,” Jean said. “In my mind, it was a commitment to not only carve, but to carve in front of people publicly.”

Bhutan is made up of 20 districts, and in each district the king and his family have a retreat house they stay in while visiting. In the Haa District, though, along the western border, King Jigme and his wife Queen Jetsum gave up their retreat home so that it could be used as a hospital.

Wanting to give the king and his family a retreat home in Haa, the Prime Minister hired Ken Ryder, owner of Bozeman-based Ken Ryder Construction, as the general contractor for the project.

Ryder first visited Bhutan 20 years ago, when he was invited to analyze the methods used for a variety of building projects throughout the country, and determine what new mechanized technologies should be introduced to their system.

“I fell absolutely in love with Bhutan on this trip,” Ryder said. After a 10 year hiatus, Ryder was itching to return to the country. So, in the spring of 2015, he emailed the Prime Minister, Tshering Tobgay.

“I explained that it had always been an interest of mine to implement some type of apprenticeship training program for the young people of Bhutan, teaching them our western methods of building,” Ken said in email that he sent from Bangkok, Thailand.

Ryder says this must have struck a responsive chord, as Tobgay replied the very same day, welcoming the idea. Keeping in line with the country’s goals of being innovative and sustainable, yet also holding on to their cultural traditions, the government wanted to use local building materials while introducing a new style—a western style.

After a few days of communication, Tobgay asked if Ryder wanted to put together a team of volunteers from Montana to come over and build an authentic Rocky Mountain style log cabin for the Royal Family in Bhutan—the country’s first log home.

With Bhutan’s deep, revered culture of woodcarvers, a craft necessary to the design of the cabin, recommending Amber Jean for the project was a no brainer.

“I always thought Amber would be a good fit for a project like his because she is so skilled at the craft, the art of carving,” Ryder said. “She has 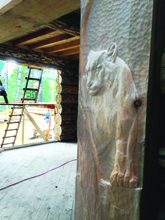 such a warm, friendly spirit and truly loves mountain environments and nature in all its manifestations.”

He also described her as a risk taker with a love for adventure and trying new things—a fitting description for Bhutan’s first female carver.

Amber Jean undoubtedly has the skill and talent to create a magnificent carving for the royal family’s retreat home in Haa. But the circumstances for this project were totally different than anything she had done. She hadn’t used power tools or completed any carvings in over a year. She couldn’t bring herself to create. All she could draw were faces of demon dogs that haunted her after being viciously attacked by three pitbulls while riding her bike in the summer of 2015.

“That messed me up. I got PTSD, and I wasn’t able to work creatively. Power tools scared me,” she said. “I would turn them on and cry.”

Jean’s studio sits on her property at the end of a dirt road near the top of the Wineglass Mountain just south of Livingston. For her daily commute, she walks through the woods from her home to her studio. She’s lived and worked up there for nearly 25 years.

“It’s pretty idyllic and really sweet, but I also have a lot of seclusion and quietude in my work,” she said.

Jean describes herself as a disciplined artist, with the majority of her days spent in the studio working. “I’ve had a practice for years where I don’t use social media before noon or use any technology or do office stuff. It breaks my process,” she said.

As her mother’s health started to fail, though, Jean broke her rules so she could take care of her mom. And then the dog pack attack completely derailed everything.

In Bhutan, her studio and the commute to work looked a little different.

Every morning in Haa, at 8:00 a.m., Jean would sit outside the Risum Resort and wait for a pickup truck that would take her to work.

“Going to the job was like going to the studio because I didn’t have internet or phone. It kicked my ass and was humbling, and it tested my mettle a few times,” she said. “Physically, I hadn’t carved for almost 2 years, and I hadn’t carved realistically for 10 or 15 years, which is a whole other mental set of tools.”

Jean was given creative freedom for the project. On her first day at the job, she met with Dahla, the other carver, to discuss their design plans. Inside the retreat house, Dahla and Jean had been tasked to carve the entry way between the living and dining rooms, made of Himalayan Blue Pine and measuring 13 feet long by 8 feet high.

Dahla was responsible for carving the dining room side while Jean worked on the living room side. Jean was hoping they could weave their designs together, but Dahla said he couldn’t dishonor his teacher by varying from what he had been taught. He wanted to stick with the traditional seven symbols of Bhutan.

Keeping in line with the theme of East meets West, Jean decided to create a realistic carving of a snow leopard and a mountain lion, weaving them in a way that would make them appear as if they were coming out of the wood, towards the viewer.

Realistic relief carving comes as no small task. But because designs in Bhutan are so stylized and traditional, Jean felt she needed to create a contrast.

“Everything is symmetrical and even, and they don’t go past the lines,” Jean said, comparing the Bhutanese carving style to her own. “I love pushing boundaries and going outside the lines.”

Battling her fears head on, Jean tackled the snow leopard first — the most technically challenging part of the design.

“Although it would’ve been easier to do a traditional carving, doing the relief seemed like the right thing to do,” she said.

After working tirelessly five and half days a week for a little over a month, she virtually completed the snow leopard.

While Jean’s carving is coming along nicely, perhaps the biggest achievement was her ability to use power tools again—a breakthrough that occurred Thanksgiving Day.

On December 13, she returned to Livingston. In March, she will travel back to Bhutan to continue carving, hoping to be done by next fall.

Although Jean is still processing her first trip to Bhutan, she says the project helped her reset.

“Even though I might have setbacks, that job accomplished something that helped me realize I can move forward. It did test my mettle and break me in some ways, but in the healthy kind of ways,” she said. “It’s so rewarding when you’re feeling discomfort and move out of it.”

Jean’s determination, strength and open nature are all evident when speaking with her. She is not shy about her experiences. She lets you in.

Her art communicates in a similar way.

Back up on Wineglass Mountain, Jean clears the goo and gunk from her studio, preparing for a fresh start. “I’m on the journey back,” she says, optimistically. “I don’t know what it looks like, but I’m definitely on track.”

An optimism surely shared by Bhutan’s royal family as well.