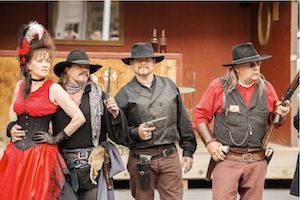 Alleged Shooter of Spectators at Gunfight Show Has Outlaw Record

It wasn’t supposed to happen, and the police recently imposed safety guidelines so it won’t happen again, but last summer something went terribly wrong at the Cody gunfight. On July 29, 2016, twelve actors gathered on 11th Street for the nightly show that mimics Old West shootouts, a summertime tradition. The crowd waited for the show with anticipation, but what they got that night, no one expected. The performers took to the streets, six guns blazing, then tragedy struck.

During the gunfight, performers fire guns loaded with blanks. On that night last July, though, one of the actors fired live rounds that struck the crowd, injuring three spectators.

Cody law enforcement later arrested and charged gunfight performer Steve Winsor, revealing in an affidavit that they found a live round in Winsor’s gun as it was inspected.

Winsor has not yet entered a plea on five misdemeanor charges resulting from the shooting, the Park County, Wyoming, Attorney’s Office told the Pioneer. His trial date is set for July 13 with a pretrial conference on June 26.

Winsor’s prior criminal history includes gunplay and dates back to the mid 1990s.

Richard Muscio, President of the Cody Gunfighters, recalled what happened that night.

“Like any other night, everything played out just fine. We were down to the end of the show, the shootout between the good guys and the bad guys….I was one of the three good guys.”

Muscio said one of the actors playing a bad guy usually walks by fanning his pistol as he passes in front of the other actors.

“We would shoot him down and he would fall to the ground”, Muscio said.

At the point in the show when this took place last July, initially there was no indication to the actors that anything was wrong.

“Then all of a sudden a police car shows up with an ambulance out front. We were wondering, ‘What’s going on?’,” said Muscio.

“We thought somebody was having a heart attack…We didn’t know. Then pretty soon another (police car) came along.”

“We were done (with the show at that point) and we still didn’t know what was going on. I walked up on the porch. My wife happened to be there that night. I asked, ‘Do you know what’s going on?’ She said, ‘Somebody said three tourists got shot.’ I said ‘What?!’”

In February, the Cody Enterprise reported details of the affidavit from the Cody Police Department’s Investigation of the gunfight. “Steve Winsor, one of the participants in the show, inadver-tently loaded his revolver with live rounds and fired them in the direction of spectators who were wounded during the July 29 show. Winsor faces five misdemeanor counts of knowingly pointing a firearm at or in the direction of others,” the affadavit stated.

The July 2016 incident was not the first time Winsor was involved with illegal gunplay or had run afoul of the law in Park County, Wyoming, according to a report filed by the Cody Police Department. In January 2015, witnesses claimed Winsor threatened a man with death using Old West style handguns. Law enforcement reduced Winsor’s original felony charge to misdemeanor reckless endangerment after a plea agreement. Winsor was then sentenced to a year of probation.

Winsor’s criminal history dates to the mid 1990s, when a Park County court convicted him for selling a gram of methamphetamine to a police informant, for which he received a sentence of five years probation. At that time, Winsor was on probation as the result of a previous charge of reckless endangerment.

The tourists Winsor injured last summer included a father and his 3-year-old daughter, who were treated and released that day. Another man was injured and treated on site. The Cody Enterprise reported that the father of the 3-year-old girl had been holding his daughter during the incident. The victim told police “he felt as if he had been hit by a baseball bat … found a quarter-sized wound on his shoulder and could see a wound on his daughter’s right arm.”

According to the same report, the third shooting victim witnessed what happened to the man and his daughter. He told the Enterprise, he saw a man about 10 feet in front of him turn in his direction. He could see blood on the man’s shirt and the girl began crying. The man also reported he had heard bullets whizzing by and was shot in both calves.

Names of the victims were not released.

Regarading how it happened that Winsor fired live rounds, Muscio described the type of revolver used and how it’s loaded.

“It was a cap and ball cylinder. You can’t just reload those in the middle of the street. You have to change cylinders,” said Muscio.

Loading a cap and ball cylinder requires that a measured amount of black powder be poured inside each chamber. A lead ball is then pressed in the chamber. Due to the time required to reload, those who use this type of cylinder typically preload several ahead of time. This was the case with Winsor.

“Winsor used a second cylinder for the final shootout. That one happened to have live rounds,” Muscio said.

Muscio explained that Winsor had been target shooting the day before. He had a few cylinders with him the night of the show. Once loaded, cylinders with blanks and those with live rounds appear identical. Muscio said Winsor firing live ammunition instead of blanks was an accident. A police investigation immediately followed the incident, ending the nightly performance for the duration of the summer.

Tourists and residents now await the return of The Cody Gunfighters this summer(see editor’s note*, the 2017 gunfights were canceled). As a new season approaches, the Gunfighters are enforcing new safety precautions at the direction of the Cody Police. Ken Martin has been involved with the show since the beginning. This season, he will be working as the show’s safety coordinator, addressing their previous failure to both vet the gun weilding participants and their firearms.

“We’ll be doing a background check on all the actors. We’ll be checking the barrels of every gun. I’ll be loading blanks in all the guns to ensure no live rounds will be used.”

Muscio also said the city requires that the gunfight obtain two permits for the show every year—a permit allowing them to block off a section of Sheridan Avenue, and a second permit that allows them to discharge firearms within city limits. Muscio said the city has approved those permits for the upcoming season.

Summer 2017 marks The Gunfighters 21st year. The group began performing in the late 70s and discontinued after a few seasons. Then, in 1995, the group began anew under the name “The Cody Gunslingers.” Since 2000, the group has been performing as “The Cody Gunfighters” and is a registered nonprofit with the state of Wyoming that donates a portion of their proceeds to local charities.

Muscio has been involved with the cast since 1995. He said he enjoys being a part of the show, even after last year’s debacle and all the years the gunfight has operated, because he is an Old West history buff.

“I like to keep myself up to speed on (the historical aspects) as much as I can”, he said.

“I talk to a lot of tourists. They ask me a lot of questions. Some come from as far away as Europe. I like to explain the truth of the Old West to them. The other thing I enjoy is interacting with the kids. The kids think you’re the real deal.”

Muscio said the format of the show attracts about 50-thousand people every year.

“We don’t do a historically correct show. We’re not trying to portray any particular scene in history. Some of the actors play real characters, including Buffalo Bill Cody… We like to do a lot of shooting because people are coming to see a gunfight. We try to have a lot of humor as well.”

Ken Martin also said the show continues to be a major draw for summer crowds.

“I give three talks a week at the Ponderosa Campground. I used to start at 5:00 p.m., but there were a lot of people who would not come because they didn’t want to miss the shootout. It’s really important to the community. The actors do a fantastic job. It’s something people can enjoy for free.”

Unable to find an insurance carrier willing to assume the unique risks associated with The Cody Gunfighters, the 2017 summer performances were canceled. In another related development, Steve Winsor was arrested in early April 2017 for Illegal Possession of a Controlled Substance, Methamphetamine, and Bond Violation.