High in the Absaroka Wilderness, It’s Called a Ghost Town for Good Reason 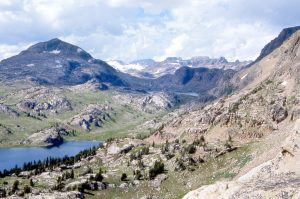 Montana towns—dead or alive—often seem similar to one another. But as with people, debunking this idea only takes a little digging.

Independence is a long-abandoned ghost town high in the Absaroka Mountains. Around a dozen miles north of Yellowstone Park, it nearly straddles the Park-Sweet Grass County lines.

The town boomed from the 1880s to the early 1900s. But getting there was never a picnic, taking up to five days by wagon from Big Timber 60 miles away. Even today you would want to pack a lunch as the last several miles along the upper Boulder River require hiking, horses, or ATVs.

But while its remoteness helped bring an end to Independence, the demise of the town was not the end of its story. Montana’s Supreme Court, and reports of apparitions in the ghost town, keep its story alive.

With elevations from 7,800 to 11,000 feet, this mining area had more peculiarities than its remoteness. Gold was first discovered there in 1864. But aside from local small-scale efforts, the gold could not really be exploited for two more decades because the Crow Indians still possessed the land. They ceded it by treaty to the United States in 1882.

In the interim, one of the scientific and artistic expeditions appointed to explore what would soon become Yellowstone Park under F.V. Hayden (and which helped inspire its founding) also noted gold in the Independence region in 1872. A few years later, the first claim was staked in the area, and the claimant’s wife gave birth to the first white baby in the district.

The mountain town became home to some 400 to 500 inhabitants. Yet despite its size, it apparently had no school, church, or bank. Telephone lines were established all the way from Big Timber. Mail and supplies arrived three times a week. As for winters, the Billings Gazette cites an 1893 edition of the Big Timber Pioneer that offers an astonishing insight: snow 15 feet deep “on the first day of June.”

A hint of life back then comes from a long, entertaining letter Independence resident “Tedericus” wrote in 1893 to the Big Timber Pioneer:

“I began life very young, so young in fact as to have a very indistinct recollection of details at that period…I have tried almost every other calling, from trying to raise ‘hell and Christmas trees’ on a Virginia farm, to prospecting, and have failed in all…My nearest approach to anything successful since then was in raising a family, and I have only done fairly well at that.” He adds that what he knows could fit in a pocket almanac, while what he does not know could fill the Encyclopedia Britannica. He digresses about responsible leadership and says being a mine manager has been his first good job.

As Tedericus references life in Independence, he first discusses the snow being navigable a month earlier than the prior year. He talks about various happenings around town, including a visit by “half a dozen eastern capitalists”; the hotel opening to “a goodly number of regular boarders, and a daily increasing list of transients.” He goes on about the saloon floors groaning “under the burden of as many as 25 or 30 manly forms in a night,” and finally a certain resident having “altitudinousness” after his wife arrived and he began “prancing around like a blue-ribbon winner at an agricultural fair.”

As for the mining, seven or more veins were developed. With names like Daisy, Poorman, King Solomon, Independence, and Hidden Treasure, they produced no less than $120,000 in gold. By today’s standards, that is some $3.5 million. But while investors, owners and operators changed hands with time, and shifting markets meant shifting achievement, major efforts to live and work around Independence ended with fires in 1904.

Yet the boom-and-bust nature of mining turned another slow corner in Independence. The 1930s, perhaps ironically given the coinciding Great Depression, provided the town a second wind. The town likely never revived to its status of the early 1890s, but miners extracted abundant deposits of gold and silver in this later period. Apparently, the very last period of production in the area took place in 1950.

Ethan Cowles was a major contributor to the success and longevity of Independence—and its trip to Montana’s high court. He began buying land and mines around Independence in 1894. But the Massachusetts man’s career had begun decades before as a Civil War veteran. In fact, when he died, in 1938, he was called the last man from that war to live in Park or Sweet Grass County.

After a decade of notable accomplishment, his property and equipment sustained critical damage in the 1904 fire. Yet the Cowles Mining Company led much of the second round of mining in the district from 1930-1950.

Much later, a shareholder dispute arose between heirs of Cowles and one of his key partners. The case ended up in the Montana Supreme Court in 1993, which upheld a district court’s decision to grant half the assets to each party. Perhaps the beneficiary of this windfall experienced the same “altitudinousness” of which Tedericus wrote exactly 100 years to the month prior.

The upper Boulder River variably falls, rushes, and ambles through a deep, long, narrow canyon. One’s experience of its rugged beauty can never be replicated in print. But now and then, visitors have reported finding more than mountains and ruins.

Some have claimed to see the ghost of Joseph Duret, a poacher who lived near Independence. In her book More Haunted Montana Karen Stevens writes that a grizzly bear killed Duret.

Stevens goes on to share that a ranger once saw a man with old-fashioned clothes pushing a wheeled cart along a trail. The ranger called to the man, but he did not reply. He seemed instead to vanish. Walking to the area where the man had been, the ranger could not see any boot or wheel tracks where the man had pushed the cart, though he could see his own tracks there.

The Great Falls Tribune further cites Stevens as telling of two tourists who spent the day around Independence. Twice they saw somebody wearing antique mining gear who ran up a steep slope upon seeing them. “The two young men could hardly believe their eyes because no living person could have climbed the bank at that speed or without scrambling for handholds,” Stevens writes.

Such tales might be as scary to witness as they are fun to tell (or invent). Similarly, residing in Independence more than a century ago was certainly harder than visiting today—yet possibly it inspires the same level of intrigue and imagination.