On or around July 1, 1947, something reportedly crashed in the Corona, New Mexico desert. After word of the wreckage circulated, Major Jesse A. Marcel, an air force intelligence officer for the 509th Bomb Group, stationed at Roswell Army Air Field, and two Counter Intelligence Corps agents surveyed the area. Marcel later claimed to have found an “aluminum foil-thin metal” that was “indestructible in the debris field,” comprising the outer body of the object. Marcel said pieces of metal at the site had “a strange purple writing” on them.

When Jesse Marcel Jr. was eleven, he said that his life took a “strange” and “wondrous” turn late one summer night in the kitchen of his family’s modest home in Roswell, New Mexico. It was there, he said, his father showed the young boy and his mother “the debris from a mysterious crash” that had occurred a few weeks earlier on a ranch approximately seventy-five miles northwest of Roswell.

For the rest of his life, Marcel claimed that his father woke him up in the middle of the night to look at it, telling him it was something he would never see again. 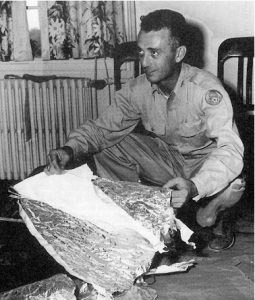 “Though my father was the senior intelligence officer on a base that was home to the country’s most closely guarded secrets,” wrote Marcel Jr. in his 2007 book The Roswell Legacy, “he was, to his family, a pretty laid-back guy…But on that night, I saw another side of him. It was a mixture of excitement and confusion, suffused with a sense of wonder that one just doesn’t see in many grown men.”

Marcel Jr. professed that his father had spread across the floor materials and objects “clearly like nothing that had been seen on Earth before.”

After the Roswell Daily Record reported that a flying saucer had been recovered on a ranch near Roswell, citing Marcel’s statements as the base intelligence officer, and the eyewitness account of local ranchers, the military issued a statement saying the debris was from a weather balloon. On July 8, 1947, a public information officer at Roswell Army Air Field declared that they had recovered the remains of a “flying disc.” But by the end of the day, Air Force base commanders released a second press release asserting the material in the debris field came from a downed weather balloon. General Ramey Roger told the press it was “just a radar deflector from a weather balloon.”

The item that Marcel Jr. said fascinated him the most was a small beam with purple-hued “hieroglyphics” on it. Marcel maintained that he and his father were told to keep quiet about what he had seen that night.

In April 1979, Marcel Jr. said that he decided to break his silence, writing to a magazine with additional infor-mation about what he had witnessed at age 11.

Interest in the case resurfaced when physicist and UFO researcher Stanton Friedman spoke to Marcel Jr. in the late 1970s.

Friedman wrote the forward to Marcel’s The Roswell Legacy and described him as a courageous man who “set a standard for honesty and decency and telling the truth.”

“His legacy is that he had the courage to speak out when he didn’t have to about handling wreckage that his dad brought home,” Friedman said at the time of Marcel Jr.’s death in 2013. “He worked with artists to come up with what the symbols on the wreckage looked like. He didn’t have to do that. He could have kept his mouth shut. A lot of people did.”

Much of the pro-UFO and pro-conspiracy Roswell viewpoint hinges on the value of Marcel senior’s revelations and the belief rested upon his personal stature and reliability. (He died in 1986 at age 79.) Friedman asserts in his book Crash at Corona that Marcel “was exactly who he claimed to be” and as such “was an important cog in a machine whose bare outline was just starting to take form. Others claim that Marcel made “self-contradictory and inflated assertions” about not only the description of the debris but his own background.

“Marcel said he had a college degree, was a World War II pilot who had received five air medals for shooting down enemy planes, and had himself been shot down—that were proved untrue by his own service file,” wrote author Kal Korff. Korff stated that Marcel was guilty of “exaggerating things and repeatedly trying to write himself’ into the history books.”

Jesse Marcel Jr. earned his own dose of notoriety as the son of the man who said he handled debris from the 1947 crash of an unidentified flying object near Roswell, New Mexico. For 35 years Marcel appeared on TV shows, documen-taries and radio shows, was interviewed for magazine articles and books and traveled the world lecturing about his experiences in Roswell. He joined the military and later settled in Helena, Mont., where he worked as an ear, nose, and throat specialist. Following the U.S. invasion of Iraq in March 2003, Marcel requested to be reactivated for active duty to serve as a flight surgeon with the 189th Attack Helicopter Battalion, based at Fort Harrison. Marcel also served as Surgeon General for the Montana Air National Guard. He died at the age of 76, found dead at his home, less than two months after making his last trip to Roswell. He had been reading a book about UFOs.

Richard O’Connor, Executive Director of the Jesse A. Marcel Library, worked as an anesthesiologist alongside Marcel Jr. He dedicated the library to father and son and started Crop Circles Research Foundation, Inc., which is “dedicated to increasing our understanding of the UFO and Crop Circle phenomena.”

“He was credible,” said O’Connor. “I knew him personally. He wasn’t lying about what his father brought home. He never embellished, only told what he saw.

“A father and his son cour-ageously came forward to tell the world an important truth. That truth was that the debris they had personally inspected, taken from the site of a crashed extraterrestrial UFO discovered outside of Roswell, was not of this world.”

The Jesse A. Marcel Library is nothing like a visit to your standard library. Expression of ideas and free thought are encouraged. Personal UFO experiences may be shared in a non-judgmental environment.

Located at 11 Ponderosa Road in South Helena, the Library is open Tuesday evenings 7 to 10 p.m.