Ellen Baumler Takes Us There

Since 1992, Baumler has made a career out of creating interpretive signs for historical sites in Montana, developing and writing walking tours of historic districts, successfully submitting National Register nominations, writing and reviewing roadside historical markers for the Montana Department of Transportation, and sharing Montana’s heritage with students of all ages across the state.

All that is in addition to authoring miscellaneous articles and books such as Montana Chillers: 13 True Tales of Ghosts and Hauntings for young readers, Dark Spaces—Montana’s Historic Peniten-tiary at Deer Lodge, and most recently Haunted Helena: Montana’s Queen City Ghosts.

“I could never get burned out on history,” said Baumler. “When I started working with the sign program in 1992, I had the opportunity to work in a position that was new and that gave me the chance to synthesize history. I was allowed to make it into something.”

She said that her career as a historian is a tutorial in “self-education.” It has also been a sustained lesson in taking initiative, gathering data and organizing information, as well as learning the appropriate means of identifying, finding, retrieving, sorting and exchanging information. Baumler is indeed one busy bee.

“If I am not traveling or speaking, my day consists of answering public queries, researching signs or programs, writing work-related articles, attending meetings in the community and with other staff. It’s an organized chaos. There is so much to learn.” 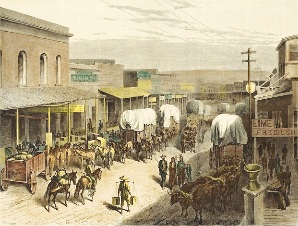 One of the historian’s great strengths is the ability to understand how people have existed, acted and thought in the past. History involves coming across and intuiting the past’s otherness and learning to understand unfamiliar structures, cultures and belief systems. These forms of perception shed important light on the influence of the past on the present. One of Baumler’s current passions is interpreting the Chinese-Montana experience. Most Chinese came to Montana initially to placer mine, which separated their families; therefore the population was disproportionately male. Chinese citizens in Helena owned property and paid taxes, said Baumler, as well as provided domestic services, and in Helena’s Chinatown operated laundries, restaurants, pharmacies, grocery stores, tailor shops, and mercantiles.

Nearly all of the buildings associated with Helena’s earlier Chinese and red-light districts have been demolished. Chinese homes and businesses eventually fell victim to Urban Renewal programs, and traces of Chinese culture disappeared. Log-cabin shops of a tailor, a druggist, and a Chinese doctor stood along Clore Street in 1890.

“Helena was one of the most ethnically diverse places in the West in the 1860s,” said Baumler. “Urban renewal in the 1970s and ‘80s destroyed approximately 235 buildings. People still mourn the loss of those structures and find it traumatic to think about. But, I really try not to focus on that. I prefer to celebrate what we have, and we still have a lot.”

Baumler’s research focuses on the largest Chinese-Montana settlement, which was in Helena, spreading out adjacent to the red-light district. “During the nineteenth century,” said Baumler, “Chinese residents east of Clore Street cultivated extensive truck gardens watered by the stream flowing along Last Chance Gulch.”

“Today,” said Baumler, “the only Chinese-associated building still standing in Helena is the Yee Wau Cabin, which stands across the alleyway south of the Caretaker’s House.”

Baumler said the date of construction of the Yee Wau Cabin is undocumented and its first occupants unknown, “but by 1879 the Yee Wau brothers, who long operated a South Main Street grocery, owned and occupied the cabin.”

Nearby to the Yee Wau Cabin stands Reeder’s Alley. Baumler said that Bannack Ghost Town and Helena’s Reeder’s Alley are two of her favorite cultural relics in Montana. Reeder’s Alley was built in the 1870s by a Pennsylvania brick and stone mason named Louis Reeder. Miners first staked their claims along Last Chance Gulch in 1864. Reeder was just one of the many newcomers who descended on Helena for financial or business opportunities. Louie arrived in town in 1867 and quickly signed on to help erect Helena’s first brick courthouse.

By 1963, Reeder’s Alley housed antiques, pottery, glass, and book shops as well as a cookie store, and the Bear Mouth Country Store, which raised funds for the local Florence Crittenton Home. After several ownership transfers in the 1970s and 1980s, the Reeder’s Alley properties were donated to the State of Montana.

“To have the properties in Reeder’s Alley that we do is truly amazing for Helena,” said Baumler. “The property links us back to the very beginnings of a town founded on the gold rush—very special.” (Reeder’s Alley is situated in the southwest corner of downtown.)

History is no simple solution; it is a complex and open debate. And a historian such as Baumler must understand problems inherent in historical records, be aware of a range of viewpoints, appreciate problems involved in interpreting often incomplete material, as well as respect the limitations of knowledge.

“There is so much that we don’t know and that we will never know,” said Baumler. “Each project—whatever it is I’m getting into—is like a blank page, and it is a great deal of fun to fill it up. We will never make all of the discoveries. But it is exciting when we do.”

Intrigue guides Baumler through her work and career and it should continue to do so for quite some time.

“When I retire, I’m sure that I will still be here playing around in the archives,” she said.

Baumler is merrily enamored with what she does. Indeed, Helena’s architectural uniqueness and historical prowess provides her with a daily opportunity to see, study, and apply history.

And Helenans—and many throughout Montana, in fact—appreciate her for it.

“I recently had someone say via social media that I was a ‘rock star of history’,” said Baumler. “I like that description. I really like that.”

Brian D’Ambrosio lives and writes in Helena, Montana. He is the author of Warrior in the Ring: The life of Marvin Camel, Native American world champion boxer.