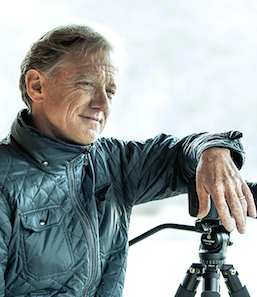 Storytelling runs in James Redford’s blood. The documentary filmmaker grew up watching some of the best American movies come together thanks to his father, Robert Redford.

Through his dad’s involvement in various film projects, James, who goes by Jamie, learned how stories are told, and what motivated his father to select the projects he did.

“Having a first row seat as a young boy to all of that, a lot of the elements about storytelling just get into your blood,” Jamie told the Pioneer during a recent phone interview from his office in San Francisco. “That’s the real treasure —just being around the craft of filmmaking.”

Jamie, now 55, is first and foremost a filmmaker, but he’s also an activist. The purpose of his films is not to entertain. Rather, he would have them function as tools for solving some of the world’s social and environmental problems.

“I get to use the craft of filmmaking and storytelling, which I love, for a higher purpose, and that’s really my calling,” he said. “That’s why I do what I do.”

In 2005, Jamie and his father founded the Redford Center, a nonprofit media entity that produces, funds and fiscally sponsors productions featuring stories of individuals who see themselves working to protect and restore the planet for current and future generations.

“My focus with the Redford Center and fellow board members is to look at the pie of stories about the environment,” said Jamie, who serves as the organization’s Board Chair. “We’re going to focus on solution-based   storytelling. A lot of time, the problems we are dealing with don’t get the attention they deserve. The idea is to make content, and get it into the hands of the people.”

Jamie’s most recent project is a Redford Center original production called Happening: A Clean Energy Revolution. The documentary aims to reassure people feeling hopeless about the current state of affairs that there are in fact things they can do to bring change—that it’s not too late, and it’s not too early either.

“The solutions are not in the future. They are here now, and this is something I learned over time,” said Jamie, who produced, directed and stars in the film. “Ultimately, the film addresses the fact that we have what we need to make a transition right now.”

Happening, which took four years to make, follows Jamie’s personal journey into the clean energy landscape. He visits various communities across America meeting with unlikely entrepreneurs who have clean energy solutions to share.

“We were really struck by the cultural stagnation around this topic,” James said, referring to the Redford Center’s decision to make a film about renewable energy. “The broader public doesn’t really understand that there is so much we can do right now to reduce our carbon footprint.”

On Jamie’s quest across the country, he searches for the answers to three main questions:

Can we meet our energy needs with renewable energy? How would we do that? And, most importantly, will we do that?

Since completing the film, Jamie says he’s most concerned with the scalability of renewables. “How do we create system changes? How do we create the ability to get renewable energy to everybody?” he asks.

Residents of Livingston, Bozeman and the greater Gallatin Valley might be asking these same questions. And, come June, they will have a chance to join the discussion with Jamie himself, as he will be speaking at the inaugural Bozeman International Film Festival.

The Bozeman Film Celebration is organizing the festival, which will be held at seven different Bozeman venues from June 7-10, 2018. Happening is slated as the opening night film on Thursday. On Friday morning, Jamie will be speaking on a panel about sustainable building with the owners of Love Schack Architecture and other local professionals.

Jamie says he attends screenings in order to localize the issues addressed in the film and have a meaningful dialogue with community leaders.

“With impact documentaries that are made to be used by others, very often the conversation is ‘what does the story mean here?’ he said, adding that working with local community partners is his favorite thing about screenings.

“If I can do anything, what I hope to convey is how much can be done at the community level,” Jamie said regarding the panel. “If Washington won’t, we will. If you look at what can happen in towns and cities, there is so much we can do. I’ll probably be reinforcing that.”

According to the festival’s Managing Artistic Director, Beth Ann Kennedy, she and her colleagues chose films and designed event seminars that address important issues for the Bozeman community, such as sustainable growth.

“As I started the [festival] programming, it became apparent that Redford’s positive and thoughtful approach about this very important issue was exactly the film to open the festival,” Kennedy wrote in an email.

According to the Bozeman Film Celebration website, the nonprofit’s mission is to “highlight movies that make a positive impact on audiences—stories that showcase the best of the human spirit while inviting a call to action.”

This year’s festival spotlights women filmmakers, directors, actors and producers, but it also showcases films that are centered on women.

The Redford Center’s Executive Director, Jill Tidman, is a co-producer of Happening, but Kennedy points out that her involvement is not the only way in which the film supports this year’s female-oriented theme.

“I believe Happening’ is about the woman in all of our lives—Mother Earth,” she said.

Jamie, who hasn’t been to the area since the ‘90s, fondly remembers visiting Livingston and Bozeman while his father was shooting scenes for The Horse Whisperer and A River Runs Through It.

“That was the first time I ever tried fly fishing,” he said.

On or off the river, Jamie will undoubtedly notice that more people now live here when he returns in June.

While Montana cities like Missoula and Bozeman are witnessing rapid growth, the state’s net-metering policy severely limits how much alternative energy, wind and solar, one can sell back to the utility company, effectively suppressing financial incentives to do so, a controversial issue.

Although Jamie says he is unfamiliar with Montana policies surrounding renewable energy, he urges both sides to have a constructive dialogue.

“It’s very complicated. People have to come together and talk. It’s not going to be a game when someone loses or someone wins,” he said.

Kennedy hopes the panel and festival as a whole will spark a productive dialogue among Montana residents.

“Through the festival, I hope we [can] offer a valuable conversation and offer strategies about how each and every one of us can continue to grow this beautiful community we live in,” she said.

As a documentary filmmaker, Jamie’s job isn’t done once the film premiers.

“You can’t just put a film out there and expect everything to come together,” he said. “Finishing a documentary that’s supposed to have an impact is really only about half way there.”

Jamie imagines he will be actively promoting Happening for the next two years. He is currently working hard to screen the film all around the world with community partners and others who care about this story.

“I stay very engaged through outreach to make sure the film gets the attention it deserves,” he said.

And Jamie’s made it clear that he believes everyone should see this film.