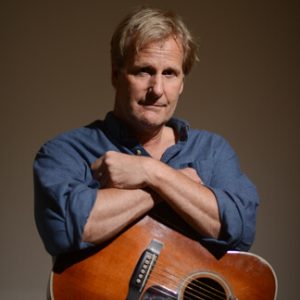 He‘s perhaps best known for playing opposite Jim Carrey in Dumb and Dumber, and has scored major credits in recently released major motion pictures—playing Apple CEO John Sculley in Steve Jobs, and a NASA honcho in Ridley Scott’s blockbuster The Martian. It may seem odd then that a star of Jeff Daniels’ rank places his career playing music on par with acting. But he does. And while Dumb and Dumber revealed his considerable comedic talent, Daniels is rather serious about his other career—he sees music as no laughing matter. At least, not totally.

And if art is the process of constant testing to see whether an artist is performing genuinely, or as a phony—Daniels’ sincerity passes that test. He respects the craft of storytelling, adores acoustic guitars (has an eponymous signature edition), and has been experimenting with harmony since the days he anxiously awaited the results of audition calls in New York City.

Music, then, for Daniels, has been a passion since the early days of his career. Is he though, an actor who makes music, or a musician who acts?

“It’s a battle and I acknowledge it,” said Daniels, 60. “It’s the big elephant in the room. I am known for Dumb and Dumber, and now I’m doing this. There is almost a kind of resentment from musicians, and I get it. I need to figure out how to challenge the audience and deliver, because many of them who are out there, they don’t expect me to be very good. For the first 15 minutes, I ask people to come with an open mind, and the rest of the night I try to prove to them that it was worth it. I’ve worked hard on that. In the end, it is for them to judge.”

Daniels concedes that an actor with a guitar is a tough sell, that it generally doesn’t work.

“I guess the barrier would be,” he said, “that lots of actors and others have tried their hand at music. Burt Reynolds. Telly Savalas. Terry Bradshaw. William Shatner. I spent 25 years just playing with friends, playing on the back porch, before I ever played out. People think if they want to see an actor, then they should go see a movie or play. Others have tried it, and people stayed away in droves.”

A theater and drama major in college in his home state of Michigan, he eventually gravitated to New York in 1976, where he acted on and off Broadway. He arrived with a Guild D-40 from Herb David’s Guitar Studio in Ann Arbor, and an old Buick. After 25 years as a closet singer, songwriter, guitarist, in 2001 Daniels took to the stage for the first time as a musician to play a fundraiser for the Purple Rose Theatre Company, a non-profit he founded in Michigan in the early 1990s.

“I remember seeing my first concert at the Bottom Line in New York,” said Daniels, the son of a small-town lumber company owner (and mayor). “I saw Arlo Guthrie. And at the time, there were a lot of musicians who were into storytelling, like Arlo Guthrie, and who were very funny. Back then, it was okay for musicians to entertain and be funny. You could do a funny setup for the serious songs. I’ve always wanted to do the same sort of thing, to be someone that did both. That has always appealed to me, a musician with just a guitar, just your songs, and entertaining”.

At one point, Daniels told us, his guitar became his best friend.

“It kept me sane in a very insane business. The business has a lot of loneliness, depression, and rejection. You are struggling with something that you want but you just don’t get. You swear it’s going to work—and it doesn’t. It was a time when the only person who believed in me was me. You would sit in a room on 23rd Street and just question why you were even there. And for me, the guitar was the calm at the center of the storm.” 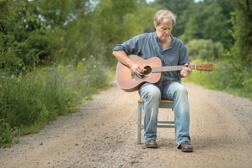 Jeff Daniels does it in the road; photo by Luke Pline

In 2001, he started playing a 1934 Martin C-2, the broken archtop of which had been replaced with a soundboard of Adirondack spruce, in effect converting it to an Orchestra Model. Since then he has released six CDs, recorded approximately 80 original songs, and has been on the road with his son, Ben, traveling and playing hard. Perhaps most importantly, every step of the journey he has been receptive to learning.

“You can’t do 17 serious songs, especially if you are the guy from Dumb and Dumber,” said Daniels. “You have to be able to be funny, and you either know how to do it or you don’t. You can do something funny and segue into Grandfather’s Hat, where the laughter has relaxed and softened the audience. It’s kind of like a gut punch. It’s a challenge to learn how to be that type of entertainer, where each night you have a brand new audience and you adjust to each crowd.”

If criteria exist for the genuineness of an artist’s work, calculation and affectation would probably not make the list—while Daniels’ guitar picking and conversational storytelling are natural and spontaneous. His songs can be touching, funny, or just plain screwball. It’s evident Daniels has plenty to express, an abundance of feelings to convey.

“I’ve got about 300 songs that have stayed in the notebook for a reason,” said Daniels. “There are some that you don’t think would be of any interest, but they end up being part of the show. The Big Bay Shuffle is a drunken dance song that’s an actual dance—well, more like a drunken sway—that they do up at the Lumberjack Tavern in Big Bay, Michigan. It looks dumb. But it kills in Michigan. There is always a song in progress. You learn to write bad ones to get to the good ones.”

Speaking about songwriters he admires, Daniels revealed what he himself goes through trying to write a good song.

“Guys like John Prine or Lyle Lovett, they are writers who happen to have a guitar, who have studied structure, who know the mechanics of the phrasing and the imagery. They listen and hear and express things only they can express. I guess I’ve never trusted the songs that you could write in a day. I am wary of it. You have to write a lot of crap to get to the good ones. Sometimes you hit three in a row and sometimes two months go by with nothing.”

Adjusting to the lifestyle, the ups and downs, and the schedule of a musician hasn’t been too hard of an adaptation for Daniels and his son with whom he merges and rotates sets while on the road.

“I’ve been on the road for 20 years,” said Daniels. “They don’t shoot movies at my house. And it’s great to be playing a different part of the country every night. I like those places that are off the beaten track. Like when we went to Latitude 62 in Talkeetna, Alaska, and had a great time, and the people were really appreciative that we made the effort and took the trouble and showed up with a show. We want to be there.”

Comparing his work as an actor, to that of a musician, Daniels said music provides him with a distinct sense of freedom and self-regulation that sets the medium apart from the movie industry.

“I have no expectations,” he said, “to reach the levels in music that I have been fortunate enough to reach as an actor. As important and meaningful as it is to me that the Steve Jobs movie is getting rave reviews, I don’t trust the success on the acting side. I don’t have that attitude that says, Once you are there…you will always be there.”

As an actor, Daniels recognizes the inherent limitations placed on his craft and career. “You are at the mercy of other people and you are always waiting to decide if you are good enough,” he said. “With music, you are not waiting for anyone else’s approval. And the songs have to work. That is fascinating to me. When you are shooting a film, you may think it’s good, you may know it’s good, but…it’s over when they say cut and wrap. And when the movie comes out—it’s their movie. You realize that it is no longer yours anymore. It’s theirs. The acting business is inconsistent, what works, what doesn’t. Your songs are constant and your songs you can keep.”

Daniels sees art, music, acting, though, all coming from the same source. “If you are a creative person, you have to create,” he said, yet his approach to music is distinctive, fundamentally uncalculated, almost Zen-like—achieving without trying to achieve.

Recognizing the fickle nature of the movie business, Daniels told us that it is the creative process that keeps him going, and that is its own reward.

“As far as acting, it could all be over on Tuesday, and I’m always fatalistic about acting. I have enjoyed the success. But for me the one constant is to create. That is the secret, I feel, to living an artistic life, whether anybody hears it or not is secondary.”

While speaking affectionately about guitars and music, and of his respect for the technique of great songwriters, Daniels expressed no delusions of grandeur as he explained what he can and can’t deliver. 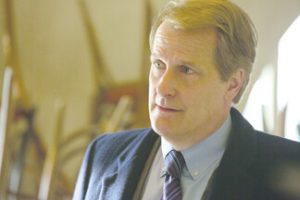 “I’m not James Taylor, or Bruce Springsteen, or someone whose greatest hits you would want to hear,” said Daniels. “I don’t have that. People are generally hearing all of it for the first time. The show becomes the storytelling, and it’s great to see people listening, because they haven’t heard this stuff before. A lot of it came out of the old musicals. You talk to the audience, it’s funny, and there’s a little portion of a musical. It all falls back on the storytelling. You know, ‘Once upon a time’…”

Daniels speaks of creativity, imagination, and full presence as the true order of things while on stage.

“It really is all about that night, that crowd, that show, the right here and right now,” said Daniels. “I’m excited to be living an artistic, creative life. Others’ definition for success doesn’t interest me. If it works, it’s gold.”

If awkwardness in art is a kind of hesitation born of self-doubt, the artist must get rid of that hesitation, especially in the performing arts. Daniels revealed that he still shakes off such sentiments. That may sound strange considering he has appeared in three films nominated for Oscars (all for Best Picture): Terms of Endearment (1983), The Hours (2002) and Good Night, and Good Luck (2005), and then in a just released, major motion picture about the iconic Steve Jobs. With his refusal to be type cast, though, or to rest on his laurels, while at the same time throwing himself before a live audience night after night, self-doubt still goes with the territory.

“I’m a guy who is interested in changing things up,” he said. “When I was acting in New York, I liked it when every character (I played) was a different character. In Hollywood, you don’t see that, they want Tom Cruise to be Tom Cruise. I’ve enjoyed the different roles, from Dumb and Dumber and Gettysburg (in which he played Colonel Joshua L. Chamberlain). After I received the Emmy for The Newsroom, 36 hours later I was beginning the shooting for Dumb and Dumber To. It is all for the fun and the joy and the art of it.”