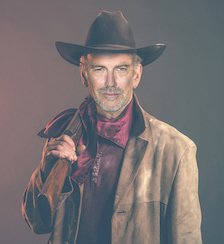 Costner, following in a long line of movie stars taken by the state, calls Paramount’s Yellowstone his “postcard to Montana.”

The series, loosely set just outside the park, debuts June 20. Shooting locations include Living-ston, Helena, the Butte area, the Crow Reservation, Darby, and Hamilton. Interior ranch house scenes in the series were filmed in a studio in Utah.

When Paramount announced production last spring, Deadline.com characterized the show as “an intense study of a violent world…where land grabs make developers billions, and politicians are bought and sold by the world’s largest oil and lumber corporations. Where drinking water poisoned by fracking wells and unsolved murders are not news: They are a consequence of living in the New Frontier. It is the best and worst of America seen through the eyes of a family that represents both.”

Reviews of Yellowstone call it “Masculine, muscular, gritty, vio-lent…” and a tailor-made vehicle for Costner’s acting style. “He’s trying to keep his business afloat during a particularly trying economic down-swing,” indiewire.com wrote. “As outside forces encroach on the Dutton’s literal and figurative territory…there are some explosive consequences.”

Paramount greenlighted an initial 10 episodes. The production is both Paramount and Costner’s first venture into series TV.

During filming last fall, the Pioneer learned, a variety of events revealed the distinct challenges of filmmaking in general and those particular to Montana.

Outside of Butte, I-15 closed down for half a day to film a dramatic showdown with a convoy of dozens of military trucks. At another time, a bear supposedly wandered through filming, had to be lassoed and “removed,” according to the Ravalli Republic. Not so, said Paramount publicist Perrie Eppie. “It wasn’t a ‘loose’ bear.  It was part of a scene that was carefully handled by our animal wranglers.”

Six wolves appear in the show, she teased.  “I can’t give away any more (than that) or I risk a spoiler.”

Much drama centers on Costner’s mixed-race daughter-in-law from the neighboring reservation, played by Kelsey Asbille, and his daughter, played by Kelly Riley. Both women add a lot of drama to the series, Eppie told the Pioneer.

Eppie said the show has yet to film location shots within Yellowstone National Park. “We try to leave a small footprint, and that can be difficult with all our trucks and equipment,” she said.

Set on the border of the park, much of the Montana filming took place in Darby. The show tried to find the production’s iconic ranch house in the Livingston area, Eppie said, and were scouting the Paradise Valley for filming locations when they heard about the Chief Joseph Ranch in Darby. “We wanted to find (a ranch house) in Livingston.  We tried.  We scouted locations in the Livingston area, but we actually found what we needed in Darby,” she said.

Currently in post-production editing, the series “has just a few more (outdoor) Montana scenes needed, as soon as the snow quits,” Eppie told us in mid March.

In an interview with the Ravalli Republic, Sheridan claimed the show’s premise as his idea, and explained that in 2013 he started writing the scripts in Livingston.

Adding an additional would-be layer of western mythology, Sheridan wrote Yellowstone, or at least the series pilot, in the famous Sam Peckinpah Suite at the Murray Hotel, his publicist informed us.

In the 1970s, famed director Sam Peckinpah lived in a suite in the Murray Hotel, and added to his own larger-than-life reputation by shooting up the ceiling. The Peckinpah suite was originally built for railway magnate James Hill’s son. Over the years, Buffalo Bill, Calamity Jane, humorist Will Rodgers and the Queen of Denmark stayed in the suite.

“I wrote a show where I wanted to be,” Sheridan told the Republic, “and that wasn’t in California but in Montana. So I came up with a story line I thought was relevant. I could have shot this anywhere else, but I couldn’t find this anywhere else…I decided to make a financial sacrifice to come here.”

Story line indeed. Sheridan did stay at the Murray Hotel in 2014 and 2017, according to hotel records. However, he did not stay in the Peckinpah suite, but a similar suite nearby, according to the owner of the hotel, who examined guest records when our editor paid a recent visit to the front desk.

Sheridan has lamented publicly the financial negatives of filming in Montana—the lack of competitive tax incentives, which other states offer production companies, and the remoteness of the state. He told the Ravalli Republic that he’s willing to testify before the state legislature on the issue.  “I took a funding hit…” he said. “You’re stuck with me now. But for the next (movie), and the next one… it would be nice (to have financial incentives).”

According to the Montana Department of Commerce, the production paid some $100,000 in labor; and another $1.45 million for lodging, supplies and location fees, including $25,000 to film in the state Capitol.

The production hired at least 63 Bitterroot Valley residents for everything from production assistants to drivers.

Last spring, Yellowstone unveiled as its producer the now disgraced Hollywood mogul Harvey Weinstein. In a Deadline.com interview, Weinstein effusively praised Costner: “We are thrilled to have such a celebrated actor as Costner to play the lead role in such an important project for Paramount Studios,” he said. “This is a coup for the show and fulfills a joint promise that Kevin and I made to each other—that we would find a mutual project to work on.”

Within months, international allegations of sexual assault and harassment derailed Weinstein’s career and reputation, and by October his name quietly disappeared from Yellowstone’s credits.

“Our goal is to bring premium cinematic storytelling to television.  With an icon such as Kevin Costner in front of the camera, and the renowned Taylor Sheridan behind the camera, we are off to a great start,” said Keith Cox, president of development and production for Paramount.

Most interior shots were done at the Utah Film Studio in Park City, Utah, which offers a 90,000 square foot indoor complex. “Utah doesn’t have the same look as Montana,” Eppie continued, “but this allowed us to do interior filming without worrying about the weather.”

The Salt Lake Tribune headlined its coverage of the production, “Utah Starring As Montana.”

The Tribune article reported that the film company “Is spending lots of money all over Utah. It’s pumping $30 million into the state economy. ‘This is the biggest thing we’ve ever done,'” said Paramount spokesman David Schwarz.

In an earlier interview Montana Film Commissioner Allison Whitmer opined, optimistically, that the series could expect a 5-to-7-year run.

Paramount could renew for another season “any day now,” Eppie told the Pioneer.

Costner worked in Montana in 1987’s Untouchables as federal agent Eliot Ness.  The Prohibition-Era movie about Al Capone and Chicago had Costner film a whiskey-smuggling scene with Wolf Creek’s Hardy Bridge as a stand-in for the Canadian border.