FWP Allows Hunters to Cull an Entire Herd of Bighorns 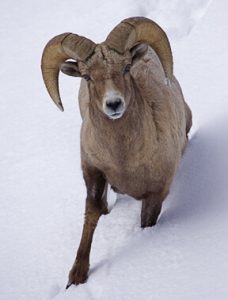 Within just 48 hours of exposure to the pathogens that cause pneumonia, most bighorn sheep respond the same way people do. Their nose begins to drip. Breathing becomes difficult. They develop a hacking cough. Soon the animals become feverish and lethargic.

But unlike humans, who generally survive pneumonia thanks to antibiotics, wild sheep often die. As the infection deepens in the animals’ lungs, oxygen has trouble reaching the bloodstream and the sheep weaken. Rams struggle to hold their heads up, weighted down by heavy horns. Eventually, up to 90 percent of wild sheep in a herd can collapse and die.

Such a grim scenario occurs regularly in many parts of the species’ range in Montana and across the West. One such location is the Tendoy Mountains southwest of Dillon. There, a herd that numbered more than 150 sheep in the 1990s has struggled to stay above just a few dozen animals in recent years. “There aren’t many options with these herds that have systemic disease problems,” said Brian Solan, president of the Montana Wild Sheep Foundation. “You can keep augmenting the herd with new sheep, as we’ve done in the Tendoys, but the new ones just get sick and die. The sensible option is to cull all the animals in a herd and start over.”

Montana Fish, Wildlife & Parks   began doing just that in September of last year using a new procedure. The department began allowing hunters to kill the remaining 30 to 40 wild sheep in Bighorn Sheep Hunting District 315 in the state’s far southwestern corner, with over half the District’s bighorns being killed by October. When the removal is complete, FWP biologists will stock the area with sheep trapped from strongholds elsewhere in the state. “We’ve run out of alterna-tives,” said Craig Fager, FWP wildlife biologist in Dillon. “If we do nothing, we won’t have any wild sheep left in the Tendoys.”

It’s generally accepted that domestic sheep carry pathogens that can cause pneumonia in wild sheep. “Though domestic sheep seem to have acquired resistance to the effects of the pathogens, bighorn sheep have not evolved with the pathogens and often develop pneumonia when infected,” said Jennifer Ramsey, FWP wildlife veterinarian in Bozeman.

Ramsey says the disease can either kill sheep outright or make them too weak to escape predators or survive winter. Bighorns in an infected herd that don’t become sick can still pass the bacteria to vulnerable sheep through close contact, common among the highly sociable animals.

The solution? Keep wild sheep and domestic sheep far apart. Bighorn sheep managers across the West consider 14 miles the minimum distance needed between tame and wild herds to prevent mingling. That’s because some bighorns, particularly young males, have a natural wanderlust that takes them close to domestic sheep. After mixing with livestock, young males sometimes return to their home herd carrying the pneumonia-causing pathogens like a bighorn version of Typhoid Mary.

Increasingly, FWP biologists have culled roaming young male bighorns and have even issued permits to woolgrowers to do the same. “We hate to kill young rams, because many would be the trophy rams of the future,” said John Vore, Game Management Bureau chief for the FWP Wildlife Division. “But if those sheep bring disease back to the herd, we could lose dozens if not hundreds of animals.”

Many large sheep producers work with FWP wildlife biologists and conservation groups to keep wild and domestic sheep apart—with guard dogs, herders, fencing, and other measures. Still, problems persist. Of growing concern is the increasing number of ranchettes and hobby farms with sheep or goats. “Most people are unaware of the problem,” said Vore. “But anyone with even a few domestic sheep within 14 miles of a bighorn herd, even if it’s a 4-H project, should know they are putting wild sheep at risk. Something as simple as keeping a small flock in a fenced paddock would help a lot.”

In some cases, just a few wild sheep in an infected herd will perish. But in others, pneumonia outbreaks can be catastrophic.

In 2010, a total of 640 bighorns died in the East Fork Bitterroot, Bonner, Upper and Lower Rock Creek, and Anaconda herds. In one northwestern Montana herd, more than 90 sheep have died within the past two years, leaving only 18. In 2015, in a herd near Gardiner, 34 sheep were lost to pneumonia.

Particularly susceptible are lambs. Bighorns that survive an outbreak may still carry pathogens that can be passed on to the herd’s young. “Even if a ewe is immune, as soon as her lamb stops drinking her milk with the antibodies in there, it becomes vulnerable,” says Vore. “And without lambs, the population just peters out.”

Ramsey says that no effective pneumonia vaccine, treatment, or antibiotic for wild sheep has been found.

Since the early 1990s, the Tendoys’ bighorn herd is among those seeing regular dieoffs. “We don’t know for sure why, but we strongly suspect pneumonia,” said Fager.

Biologists often can’t verify the cause of death because carcasses are so quickly consumed by scavengers, he explained.

As has been the case in other struggling herds, augmenting the Tendoys population with new bighorns from elsewhere in Montana—an expensive and labor-intensive operations—hasn’t helped. Though the pathogens don’t live long in the environment, the new animals contract pneumonia from the remaining bighorns and often die. “Once the disease becomes endemic in a herd, the herd struggles to recover, no matter how many new sheep you add,” says Fager. “We’ve augmented this herd three times over the past two decades with 98 sheep, and it’s still struggling. To keep repeating that with poor results is not only foolish but a waste of hunter license dollars.”

Starting in August, FWP began selling over-the-counter licenses allowing hunters to take a wild sheep in the hunting district. “It’s a tough place to hunt, but a lot of deer and elk hunters hunt that area. If they have a sheep tag in their pocket, they’ll have the option of taking a bighorn and helping with the herd reduction,” said Vore.

Solan, the Montana Wild Sheep Foundation president, acknowledges that the herd cull would be quicker if FWP used aerial gunners. “But this way public hunters have a chance to go in and harvest a sheep and it won’t cost the department as much,” he said.

Afterward, FWP will conduct aerial surveys to be sure that every sheep has been culled. “Only when we’re positive that the herd has been totally depopulated will we proceed with bringing in new sheep,” said Vore.

The objective of this tough-love approach is to create a healthy, productive, and self- sustaining bighorn sheep population. Vore suspects it may take at least two years of aggressive harvest to remove all the sheep.

Tried in Other States

State conservation agencies elsewhere in the West have culled entire infected herds. In 2012 the Nevada Department of Wildlife used aerial net-gunning to capture for lethal removal, the remaining 15 sheep of a herd that had grown to 200 animals just three years earlier but had been decimated by pneumonia. Mike Cox, NDW big game biologist, said the agency restocked the area with 20 sheep, which so far show no sign of disease.

In 2014, after years of trying to treat a herd for multiple diseases with no success, Colorado Parks and Wildlife biologists removed the remaining 13 sheep and restocked the area with 15 new ones. “It’s still too early to tell how well this is working,” says Brian Dreher, the agency’s senior wildlife biologist.

Some critics of the Montana plan point out that domestic sheep in the area could infect the new bighorn herd. Yet according to the recently approved environmental assessment that FWP prepared for the project, domestic sheep numbers have declined significantly in recent decades. Fager says he works closely with the few remaining owners of sheep and goats to keep their animals separate from bighorns.

Besides, he adds, the alternative to the proposed project is for bighorns to disappear entirely from the Tendoys. “If we do nothing, that herd will just sputter out and we won’t have any sheep left,” he says. “There are certain realities when it comes to disease that we can’t ignore, and we need to do something different.”