The small mountain town of Gardiner, Montana, lies nestled in the shadows of the Absaroka Mountains to the east and the Gallatin Range to the west. Its southern edge meets Yellowstone National Park at the confluence of the Yellowstone and Gardner Rivers, and then stretches three miles northwest along a narrow swath of dry sagebrush scrublands. If there was a sign posted along the highway announcing Gardiner’s population, it would read “875.” It’s a small population relative to the more than 630,000 visitors passing through Yellowstone’s first gateway community each year. 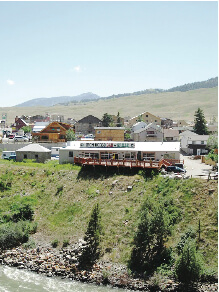 Looking west across the Yellowstone River

Despite the multitude of visitors, Gardiner lacks the contrived atmosphere of a typical tourist town. While there are gift shops, hotels, cabin rentals, and more restaurants than a town of its size can support on its own, Gardiner’s atmosphere is one of belonging to the locals rather than the tourists. Its paved streets are peppered with potholes while many of its side streets remain dirt and gravel. The homes seem lived in rather appearing as if they are on display for the enjoyment of the visitor. And when the community center hosts a play or live music event, the audience is filled with residents rather than vacationers. As one resident put it, “Gardiner is spectacularly authentic.” But some residents worry that Gardiner’s changing social landscape threatens to erode this small town’s authenticity.

When Ashea Mills moved to Gardiner twenty years ago she fell in love with the community’s rural character and small town feel. She could name all her neighbors and knew a bit about each of them. Now, when Mills stands on her front porch she sees fewer familiar faces than she used to. “I can see 16 vacation rentals from my front porch just on my street,” says Mills.

The loss of residential properties to vacation homes has soared in recent years. Owners are converting their homes to vacation rentals to accommodate the growing number of tourists seeking more options than hotels offer. While Mills owns her home, she is worried that the trend is shutting out local families and driving the workforce out of town. “How can we entice good teachers when there is literally nowhere to live?” asks Mills.

The trend has made it difficult for newcomers like Stefanie Wacker, who moved to Gardiner last year when she landed a job with Yellowstone Park. “It took me six months of constantly looking and talking to people before I found a place to rent,” says Wacker. She’d prefer to own her own home but says that the increase in vacation rentals has driven up housing prices.

Even long-term residents struggle with housing. Last year, Mills says that an entire apartment building was converted to vacation rentals, leaving tenants scrambling to find a place to live. Some of them were forced to move out of town. And when the rare rental is adver-tised in Gardiner’s local newsletter, the waitlist is often a dozen deep. The situation is even worse for seasonal employees looking for a rental during Yellowstone’s brief summer season, since most employers don’t provide housing.

Wacker could have moved about an hour north to Livingston, but the rental market is extremely tight there, too.  There is even a bus that runs most week days from Liv-ingston to Mammoth, but Wacker said it wasn’t an option she seriously considered. “Having just moved here I would never have had the chance to get to know anyone and I wanted to be part of the community.”

Chris Lyness, a local real estate agent with ERA Landmark, says he doesn’t like this trend any more than anyone else, but he doesn’t blame owners for their decisions to sell their properties as vacation homes or to turn them into vacation rentals. “If someone bought a property for $30,000, 30 years ago, and it’s worth $300,000 now, they should sell it for that. It is a matter of supply and demand,” says Lyness.

But it’s not only vacationers looking to spend a week in Yellowstone that’s driving the market. Lyness says he gets calls all the time, from wolf watchers to retirees, people looking to relocate to the area. “These people come here on vacation, fall in love and then decide to move here,” says Lyness. They are often willing to pay more than those in the local workforce.

Gardiner is an unincorporated community, so there are no laws regulating growth and development. Without ordinances or zoning, property owners are free to develop their land to suit their needs, but the lack of oversight also has its disadvantages. Businesses established near homes create noise and traffic issues for residents. And with no height restrictions on buildings the views may be compromised as buildings grow taller. In a 2013 study of resident’s perceptions of Gardiner, one resident wrote, “The lack of zoning or ordinances has allowed businesses to do whatever they want with little regard to nearby residences.”

There have been a few attempts in the past to incorporate Gardiner, but there was enough opposition from locals that it never happened, says Bill Berg, president of the Greater Gardiner Community Council. The Council is a grass-roots effort to involve local citizens of Gardiner and the surrounding com-munities of Jardine and Corwin Springs to participate in decisions about the future of their communities.

Berg says the Council is tackling the housing issue, but “it’s a tough nut.” The project involves the Montana State University Extension, Human Resource Development Council in Bozeman, and Park County. Together, their objectives are to determine what the current supply and demand for housing is and to explore options to keep the workforce local.

Berg says some possible solutions might be tax incentives and subsidies to increase the availability of affordable housing. Gardiner is embedded in one of the last remaining intact wilderness areas in the U.S. The landscape is what has attracted visitors and residents for more than a century, but because Gardiner is surrounded by wilderness that cannot be developed, there isn’t much room for growth to relieve the housing crunch, says Berg. Instead, the solution needs to come from within the community.

Like Lyness, Berg doesn’t blame homeowners for wanting to get top dollar for their properties. Berg recognizes that someone’s home or land may be their biggest asset and asking them to put the community ahead of their own financial well-being is unfair. “Money is a powerful incentive,” says Berg.

The rise in vacation rentals is not a passing trend. Other mountain communities have struggled with housing issues for decades. A study released this year by Estes Park, Colorado, found that 54 percent of the town’s rental housing was vacation rentals, and of the 200 long-term rentals only four were listed as available. In Jackson, Wyoming, the lack of long-term rentals has left some residents homeless despite working full-time, and workers in Moab, Utah, are forced to camp on federal lands or commute long distances for low paying jobs.

Each of these communities has taken steps to make living there easier for its residents. Estes Park has deed-restricted housing, which means that workforce or attainable housing can’t be rented as a vacation home. Jackson bans short-term rentals in its residential neighborhoods, and Moab’s housing authority instituted a rental assistance program to keep its workforce local.

But even with such programs, these communities continue to struggle with increasing tourism. How Gardiner will handle its own tourism boom is uncertain, but most residents agree that they don’t want Gardiner to become a resort town. “I don’t want to live in a resort. I want a real community in which to raise my daughter,” says Mills.

The Eyes of the Future

Living in Gardiner has never been easy. Gardiner experiences boom and bust cycles as the tide of tourists flood this tiny town during the summer months and leave with the first snowfall. It has always been a town of scrappers eking out a living the best way they can, often making due with low paying wages and less than comfortable accommodations in order to call Yellowstone home.

Since Gardiner’s establishment more than 100 years ago, residents have managed to accept tourist dollars without sacrificing its small town feel. For now, Gardiner still belongs to the locals, and it is the locals who have the chance to shape the community they live in. “The Eyes of the Future are looking back at us and they are praying for us to see beyond our own time,” wrote Terry Tempest Williams. Berg says, “I’d like to think they’ll thank us.”