The Mysterious Disappearance of Aaron Hedges 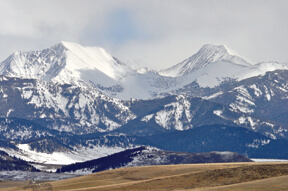 The rugged and unforgiving Crazy Mountains have always held their share of secrets.

Take the name, for instance. According to the most popular legend – and the one that is perhaps least politically correct—the mountains were anointed in memory of a woman whose family of homesteaders were massacred by Indians while she was out walking at the base of the majestic peaks. When the alleged perpetrators returned a week later, she burst from the cabin and attacked them using a tomahawk that had been used to slay the oldest of her three sons. The Indians retreated, watching in dismay as the “Crazy Woman” fled into the wilderness, never to be seen again. Hence, the Crazy Mountains.

Since last autumn, the Crazies have held a new mystery, one filled with both frustration and sadness. Aaron Joseph Hedges, a 38-year-old, well-regarded hunter from Bozeman, was last heard from on Sept. 7, 2014, and to this day he has not been found. Even after the discovery of his bow and backpack in mid-June briefly offered hope, the case remains open, as law enforcement officials attempt to find answers to a riddle that may never be solved.

“It’s gone cold,” said Sweet Grass County Sheriff’s Lt. Alan Ronneberg, who was involved in the original 12-day search for Hedges. “With the leads that we had, all of the interviews have been done, and there are no new leads. (From) all of the theories that have been thought up, and been pursued, we just don’t have the answer yet.”

Corp. Gregg Todd, who heads up Park County’s Search and Rescue, also is unable to draw any firm conclusions. “I can’t,” he said. “It’s the million-dollar mystery we have right now. We just have so many unanswered questions that it really just doesn’t give us much of a direction.”

The mystery began when Hedges became separated from the two friends who had accompanied him on a hunting trip into the Crazies. “Archery hunting is not really a group effort,” Ronneberg pointed out. “I think he went off and was going to do his own thing.”

Hedges reportedly radioed his friends to let them know he had missed a turnoff back to their camp. His plan was to seek shelter near the Sunlight Lake area. “They apparently had a hunting camp the previous year,” Todd said, “and it was our understanding he was headed to that cache.”

Said Ronneberg: “The original plan was that he was going to go up to that cache to get a sleeping bag and some other stuff and then come back. He radioed them that he had missed the turnoff and they told him he needed to come back up the trail and come back into camp. That was the last time they heard from him.”

“It was my understanding that she had received a call from one or both of the guys who were with her husband,” said Park County Sheriff Scott Hamilton. “She’s the one who contacted Sweet Grass County, and they are the ones who referred it to us.”

The duration between the time Hedges went missing and the authorities being notified did raise some eyebrows, especially among amateur sleuths on social media who made instant, unabashed accusations of foul play. Even Ronneberg, an experienced bow hunter, did concede that the time lapse might seem peculiar.

“To me, that just seems too long to report somebody missing,” he said. “I can understand if your buddy’s missing, you can go out and look for him for a day, but after that, (you) need more help. I might have waited a day—he might have killed something, and it might take some time to get back to camp, so I’ll go look for him the next day, see if he needs help getting stuff out. If I can’t find him by the end of the day, I’m getting the hell out of there and asking for help.”

Todd indicated that he believed Hedges’ friends made an earnest attempt to find him. “Oh yes, oh yes,” he said.

Added Hamilton: “The remote-ness of the area, the lack of cell coverage, there was no way to communicate out unless they came all the way out.”

Whatever the reason for the time lapse before Hedges’ disappearance was reported, it had its consequences.

“By the time we were notified and were able to spin up, the weather had hit,” Hamilton recalled. “So, we’re dealing with two feet of snow in the mountains. The continuing storm made air searching difficult for the first day or two—actually impossible.”

“We got two feet of snow, and it was snowing hard,” Todd said. “We actually deployed a horse team based on what we had initially. They made it as far as they could—maybe even farther than they should have—and came back out. It was snowing hard, (and) the temperature dropped 35 degrees. It was tough—very cold, very wet. Probably in the teens, if I remember right. The horse team got back well after dark, but we didn’t search in the darkness in the snow, (because) that’s not safe.

“The horse team was our initial response,” he added, “but we had dog teams and foot teams the next day.”

The effort according to Park and Sweet Grass counties “exhaustively searched the Crazy Mountains east of Wilsall” and included 20 dog teams, seven horse teams, 59 ground searchers, and National Guard and private helicopters equipped with night-vision equipment and spotlights. By Sept. 22, officials decided to scale back the search until they received more information. That moment arrived this past summer, when Roger Beslanowitch, a butcher from Powell, Wyoming, happened upon Hedges’ belongings while visiting relatives at the Anchor Ranch in Sweet Grass County.

“My son-in-law was going to fix some fence and it was kind of steep, so I dropped him off at the top,” Beslanowitch recalled, referring to rancher Charlie Rein. “It was going to take a while for him to get done fixing the fence, so I had some time to kill. He told me if I wanted to look at a beautiful view, to go on top of a ridge above, and I did.”

After taking in the vista, Beslanowitch decided to take a short cut through a stand of timber. That’s when he spotted an orange hunting vest, as well as a backpack and clothing. His initial fear: “I thought a bear got somebody.”

Beslanowitch’s inventory at the scene included a “bow, backpack, socks, shirts, sweatpants and a vest.” The backpack had holes in it, which he assumed were caused by small varmints. Wrappers from granola bars, along with other debris, were scattered nearby.

“I thought some out-of-state hunter got cold and disoriented and wanted to go home but he couldn’t find his stuff,” Beslanowitch said. “So I gathered it all up to put it in the backpack to haul it back out. When I was just about done, I saw a piece of paper and it was part of his license and it had his name on it. It said Bozeman, Montana.”

If in fact the gear had been left among the trees by Hedges, he would not have been that far from possible rescue. “By the way the crow flies,” Beslanowitch said, “I’d say it was a couple miles from the main ranch house.”

Could it be, that being hypothermic and disoriented, Hedges removed layers of clothing and headed in the wrong direction?

Yet, if the hunters began their trip from the Cottonwood Lake Trailhead on the west side of the mountains, and Hedges was bound for Sunlight Lake to the north, how did he end up on the east side of the range? The distance he would have had to cover was perhaps 15 miles, much of it off-trail and arduous.

“Everything off that trail is just nasty,” Ronneberg said of the terrain. “Rocks, underbrush, sliderock, sliprock, it’s tough to get around when you’re off the trail. You don’t have to be very far off the trail when you’re in it.”

With a ruthless storm coming in, the decision to travel east along the Sweet Grass drainage would have presented a considerable challenge for even the most experienced outdoorsman, and Hedges would be almost certain to lose radio contact.

“I’d be speculating,” said Park County SAR’s Todd, when pushed for a theory. “We’ve got a lot of unanswered questions, and until we have some credible information to push us in another direction, it’s just an open investigation.”

With the case still open, law enforcement officials would not disclose the identity of Hedges’ hunting companions. Both men were interviewed by Park County Det. Brian Green, a routine procedure in this type of investigation. When contacted, Green declined to add any further comments beyond those offered by Hamilton and Todd.

“With a missing person’s case, there are privacy concerns,” Todd said. “If there are elements of a criminal nature at some point, because we don’t know, we can’t take a chance on (certain) information being disseminated.”

While Hamilton said authorities “have to look at all possibilities,” he seemed to indicate that Hedges likely died from natural causes.

“There are more questions than answers,” he said. “But if you follow the evidence, the interviews, everything from the start to where we are today, it indicates that this fellow was up there to go hunting and super bad weather came in when he was by himself on a trail heading into Sweet Grass County. With the items being found in Sweet Grass County, it all indicates to me that he had gone over there and succumbed to the elements.”

Missing from the evidence is the fact that Hedges has not been found. While not unheard of in missing persons cases, this element is what stands in the way of ultimate closure. In the meantime, the questions will remain.

“You think of it, and it’s a theory,” Ronneberg said. “Everything from he got turned around just off the trail, got caught in the storm and passed away from hypothermia, to he’s in Mexico somewhere, to UFOs got him. There is literally a full list—a legal page—of theories out there.”

How long will the case remain open?

“Indefinitely,” Todd said. “We’ll keep the investigation open hopefully until we find him.”