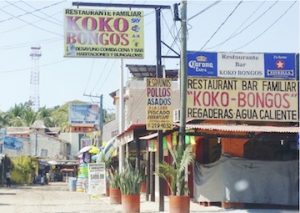 The Ghost of Old Mexico Haunts the Modern World

On a park bench in San Pancho, Mexico, a beach town one hour north of Puerto Vallarta, an old woman sat stoically in a square she had probably visited all her life. We’ve seen this, an elderly person sitting quietly in a park, at peace in the autumn of life. But this woman, seemingly at peace, with poise and composure, shared little in common with those around her. And the people there, socializing and walking, appeared in vivid contrast to the old woman — French speaking Canadians, dancers on Swing Break, teens on skateboards, dreadlocked stoners, an eclectic cultural menagerie born not of Mexico but far off places.

Waning sunlight fell upon the woman’s dignified visage, the convulsive history of her country chronicled in her features—bronze skin and folds around the eyes like her Indian ancestors, the high forehead of Spanish conquistadors, these once warring strains sculpting her distinguished countenance centuries after Europeans forever changed the face of the New World.

I fumbled at a nearby ATM, trying to coax pesos from a machine. The exchange rate benefits American visitors these days—the currency fell 30 percent against the dollar in the wake of Trump’s rhetoric on trade. I was having a problem though with the conversion fee, and the distraction of the woman, like a ghost from another world in that trendy seaside square. So I lingered longer than necessary, but it was not in vain for what the woman would reveal.

Dressed for the 1940s, she sat quietly to my left, only the occasional ripple across her face, and near a statue of Saint Francis, his arms stretched wide—the town’s official name being San Francisco (Pancho being the nickname in Spanish for Francisco). That statue may have stood for decades, maybe a century. Or it may have been erected recently, as the town reaffirms a Roman Catholicism that came with the Spanish invaders who reshaped the indigenous mind. Maybe that’s why the woman sat in that place, beneath the statue, because next to nothing in San Pancho, including me, resembles the Mexico of her past, the life she knew, except the likeness of that Saint.

Doesn’t take a genius to observe the cultural tsunami rolling up the coast from Puerto Vallarta and Acapulco. That wave hit this little town, transforming it over the last four years, and before that Sayulita twenty minutes south, the metamorphosis having converted an obscure coastal town first to a surfer hangout, then to the destination party-town it is today.

Finally, the ATM spit pesos into my hands, my transaction complete. Hoping to catch the old woman’s glance, I walked by cautiously and said Buenos tardes, Señora as a gesture of respect. She returned the greeting with otherworldly calm, and I found no revealing signs, but wondered what she was thinking, if she had grown accustomed to the changes, or become so alienated that she’d escaped into mysticism.

That square forms the terminal of the main drag through town. Not a square, actually, but a circle ringed with sellers of hats, scarves, artwork, and curios through which sun worshipers weave toward a stunning two-mile beach dotted with an eclectic variety of human beings — sand trollers, wanderers, swing dancers of inscrutable gender, and lethargic dope smokers, as the aroma of marijuana mingles with air from the Pacific Ocean.

Up the main drag toward the Tepic Highway, and beneath an elementary school and park — shops, restaurants and vacation realtors line both sides of the narrow street. A jazz trio plays acoustic and sax. Young tanned women walk barefoot in the middle of the lane, and, as night falls, a fire juggler performs for tips begged from streetside diners—various languages tumbling from their mouths, frequently and unexpectedly French. With the allure of fantasy, the scene descends, subdued and sublime, quiet enough to pick out an upright bass, and trendy like Sayulita a decade ago—this summered beach town that no longer resembles Mexico of the past because it’s become something else.

Let’s forgo obligatory denunciations of commercial development and tourism. Not yet anyway, because San Pancho, while no longer authentic Mexico (a fire juggler?) offers a lustrous change of scene after an austere Montana winter, even if one laments here the passing of Old Mexico. San Pancho hosts no high rises like Puerto Vallarta, no parade of drunk twenty-somethings like Sayulita, just an appealing town I never knew before March 2017.

But San Pancho now offers a town the old woman never knew either. And I had seen her before, I was certain, the eyes in her head, her haunting telepathy. I knew what she wanted to say—she had told me years before, back in Montana, and like an apparition conjured by Castaneda’s sorcerer, Don Genaro, her ghost had returned.

We’ll get back to her, and take the road to Koko Bongo’s, but first let’s travel the Nayarit coast, putting off apparitions until they will no longer be denied.

Change comes to Marcos, but the town remains. Toward a headland at the north end, the mile and a half of open beach avails a sense of infinity. Walking there, half naked, liberated, town and houses drop away leaving the curvature of the earth across the Pacific on the West, tropical hills looming in the east, and an estuary filled with exotic birds over dunes between the beach and hills.

A copper-tanned white man I spoke to in passing, without stopping, as he strolled south, captured the intimate sensation of that place, almost ecstatically in tone of voice as he exulted, tossing his hands in the air—Life is beautiful.

We, of course, have beauty up north, and the grass is always greener, it’s just that Lo de Marcos requires fewer clothes, and for those addicted to the wilderness that is the tropical sea, sensations arise reminiscent of paradise.

Towns textured by Mexico old and new dot the coast farther north all the way to San Blas. That Mexican town, not overly small, rests 3 hours by car north of Puerto Vallarta off the Tepic Highway—not a highway, but a road one lane each way that requires aggressive passing to avoid dawdling behind trucks, yet it’s a good road upon which drivers attain high speeds—a Porsche Carrera blew the doors off my VW Vento while I was doing 120 kpm.

Above Lo de Marcos, find Los Ayala, a larger small town, not like Marcos at all, part Mexico, part southern France, then Rincon de Guayabitos—I had seen this town in images before arriving, thought it modest and residential, but images deceive. Sixty seconds off the highway a Mexican Riviera spreads down the coast there, a 2 mile beach resembling, what, Rio de Janeiro? —Not quite, but a major destination for Mexican beach goers, especially over Semana Santa, not trendy like Sayulita and San Pancho, instead a formidable presence on the Nayarit coast without nouveau trappings, a riviera town Mexican style. Its crescent bay holds fishing boats as if from a postcard. Bars offer $2 tequilas. Restaurants hover over the bay serving chefs specialties for under $10, most only six, and Mexican visitors clog the beach on weekends.

Somewhere up the road, above La Peñita, whose seaside streets remain utterly Mexican, where one might disappear, live out one’s days (a town to which I will return), a sign points to Playa Chacala.

Take that road. It’s the road to Koko Bongo’s — winding through jackfruit orchards and lush greenery to the gritty beach town of Chacala. And it’s all so unlikely, a hard cobbled town in a basin on a magnificent beach that hosts $200,000 RVs nearby in an idyllic palm treed park. But that’s as posh as it gets, this rough little town, something out of a spaghetti western, but with a tourist shop or two, a few quaint hotels, shack restaurants on its immense tropical beach, and the unavoidable Koko Bongo’s fixed in the center of it like a dog sleeping in the road.

What’s Koko Bongo’s? In the end, you need to find out for yourself. Koko Bongos elsewhere in the world present hip nightclub scenes. But this Koko Bongo’s—as if. They stole the name and spelled it with a K, an attempt to merge incongruities, the old and the new. This Koko Bongo’s offers family dining near the sea and a Mexican bar (no body shots off tan nubile breasts, sorry). A tacky-chic affair up the coast, beyond the cultural tsunami, this haven provides a way of life for a family of seven with their five children working in the restaurant and bar, as a town slopes into the sea by way of a road meant for a soapbox derby. Chacala combines the rough and the sublime, attracts wanderers, and gives off an uneven cool requiring two months, not two days, of assimilation. I found an older couple streetside, tanned and good looking, stopped the car, reached out. No Inglés, they said. No Espagñol either. We weren’t getting anywhere, but they spoke French, not that of Canada but France. On the road up the coast in their RV, this place captured their fascination. Magnifique, the lady said, truly wowed, so they parked and stayed two weeks while caravanning the Nayarit Riviera.

Chacala carves a hole in the wall in hillsides along the Pacific. Nothing trendy about it, and the people don’t speak English, but like the French couple, you get buy.

And what of our apparition, the old woman? —Back in Livingston, some years ago, she spoke to me, the mother of the world who observes the passage of time through human eyes. She looked different then, but still stately, dignified, and what she told me, stayed with me. She did not sit in a park with stoned hippies and fire jugglers, as she had in San Pancho, or grieve by a statue. But like her twin there, she did not give up her feelings easily. It was the odd wince, at first, a tone of lament. She spoke of her town, of downtown. Her look of indignant sadness about something over which we have no control said it all. It has changed, she declared like a judge, and she said it again with reserved intensity that revealed a violation. People had moved in, brought their ways, their politics and graying ponytails, had imposed themselves upon her home, not leaving it be, but reshaping it with disregard for the natives born here. This was no happy thing, and a haunting reflecting an all too rapid passage of time pooled in her eyes, as she carried the feelings of others too conservative in their sensibilities, too humble to condemn the colonizers who displaced so many who frequented downtown all their lives and knew Livingston as home.

And the twenty-something stoners of San Pancho have no idea, cultural conquistadors who believe the town and the world is theirs for the taking (and it is) but with no thought of humble assimilation.

It is written that this world offers only the transitory. As Leaves of Grass, all things pass, and, so, dwell in the changeless prerequisite that binds all as one in the depths of existence and reality. Yesterday, today was tomorrow—tomorrow today will be yesterday. Who withstands the passage of time and change? Today’s invaders become tomorrow’s natives, tribes displace tribes, that history shaping this continent long before its discovery as a New World.

Yet changes, now, culturally, come and go while we sleep via air traffic and text messaging, so rapidly reshaping the appearance of reality. The ghost of San Pancho reveals this; she feels consumed, but hers was a new wave consuming the old. And so it goes.

Clinging to the known, we seek that which never changes, the eternal. This comes at any age, even to the infant, and to any country. Meantime, before the end of time, so much discovery awaits. And as the man said on the Nayarit Riviera, Life is beautiful.