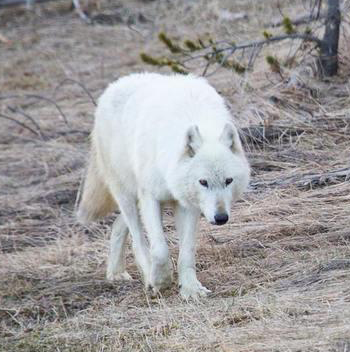 Discovered by hikers inside the park near Gardiner, Mont., the Canyon Pack alpha female was euthanized by park staff due to her severe injuries. YNP officials believe she may have been shot either near Gardiner, or the Old Yellowstone Trail, according to a YNP press release.

The necropsy was performed in Ashland, Ore. at a U.S. Fish & Wildlife lab.

The alpha female was one of just three white wolves in YNP. She was 12-years-old, twice the normal life span of a park wolf; had been with the same alpha male for nine years; and given birth to at least 20 pups. Her range in the north of the park extended from Hayden Valley to the Firehole River area.

The death of this Yellowstone wolf comes as just the latest incident throwing Yellowstone into the news. Trying to control the narrative, this time YNP has imposed a news blackout.

The day before the wolf’s death went public, Smith met with YNP employees to give them a head’s up regarding the upcoming news. The park’s public position remains ‘no comment’ but Pioneer sources within the park admit that at that meeting officials “Were livid over this wolf’s death. They are very intent on getting whoever did this.”

Montana’s Wolves of the Rockies added $5,000 to the $5,000 reward put up by YNP. The group’s president Marc Cook told the Associated Press that he believed the wolf’s killer was someone angry about the reintroduction of wolves to the park more than two decades ago.

“People take matters into their own hands and feel they are above the law and they kind of flaunt that fact that they can do what they want to do and there’s no repercussions,” Cook said.

The Center for Biological Diversity sent a release from its Victor office announcing it is offering its own $5,000 reward for information as well.

“We sure hope they catch the despicable killer of this wolf,” said Andrea Santarsiere, a senior attorney at the center. “Shooting this wolf in Yellowstone National Park, an area that should be a safe haven for wildlife, is not only illegal but repulsive.”

Resulting from the transfer of gray wolf management from the federal government to the states, Montana and Idaho have wolf hunting seasons, and after a four year court-ordered hiatus, wolves can be shot again at will in Wyoming, except in the northwestern part of the state near Yellowstone, where wolf hunting is regulated. It remains illegal to kill wolves inside Yellowstone National Park.

With the at times wholesale destruction of livestock by wolves near Yellowstone, animosity can run deep toward wolves and the government imposing them upon the local populace.

Paradise Valley outfitter Ryan Counts, a fourth generation Montanan, has strong feelings about wolves. “I hate them,” he said. “Shoot them—people are fed up.”

As an outfitter, Counts remembers both the local elk herd before wolf reintroduction in 1995, and the full motels during hunting season. “We had a herd of 19,000 elk in 1995 and now it’s knocked down to 4,000. The motels in Gardiner used to be full; now it looks like a ghost town during hunting season.”

Montana first reinstated a season for wolves in 2009; in the first couple days of the season Counts shot wolf 527, a famous YNP research wolf. That made the LA Times and got him “a lot” of hate mail.

The death of wolf 527, though, underscored the other side to the controversy of wolf reintroduction and a wolf hunt. She was the Alpha female of the Cottonwood Creek pack. Within days of the beginning of the hunt, her mate and female offspring were also killed, a total of four members of the 10-member pack. That effectively ended research into one of the park’s most important study groups, said YNP biologist Smith.

Counts doesn’t specifically outfit wolf hunts, but will shoot them if he runs across them. He’s killed 11 wolves in the last eight years, he says. And, he says, he’s hearing no local buzz on this white wolf’s death.

The white wolf and her mate had been seen in Gardiner in the last few months, “eating out of garbage cans and hanging out on the road,” he adds. Researchers say she and her mate had recently been overturned as their pack’s alpha breeding pair.

So who would shoot this wolf, and why? “I have no comment I’d say in the paper,” Counts says.

He does have a comment, though, on what might ease local pressure and feelings: A larger quota allowed for wolves shot just outside the park. Currently, only two wolves are allowed in the “buffer zone” along the park’s 250 square mile north boundary.

Even that buffer zone—a way to protect the park’s research wolves—has proved controversial. Montana wildlife officials tried for a no-kill zone in 2012 and a state judge struck it down. A quota of four wolves was established in 2013; that was changed to three in 2014 and, finally, two in 2015.

In July 2016 Montana wildlife officials rejected a proposal to up the quota from two animals to four. Montana Fish & Wildlife Commission Chairman Dan Vermillion told the Associated Press then that keeping the status quo was a compromise between conservationists and ranchers.

These specific numbers “Don’t make much difference to the wolf or elk population,” Vermillion stated. “It is more about the emotional conflict between the different sides of the wolf issue.”

The park, angry over a famous animal poached—and an outfitter who admits he’s sick of wolves. It’s a reality that reflects the inevitable consequences of wolf reintroduction into the modern world. Since they were reintroduced in Yellowstone in 1995, wolves have had a constantly contested presence.  Competing interests—ranchers, hunters, environmentalists and scientists—all make their case for and against this meta-predator.

For every point conservationists make, ranchers counter that wolves have maimed, killed and terrorized Treasure State flocks and herds since their reintroduction. Just one example: In August 2009, 180 miles from the park, a Dillon, Mont. rancher found the carcasses of 122 purebred sheep, wolf-killed in their pasture in just one night.

In 2009 Montana opened its first wolf hunt in decades. That hunt killed 15 wolves from 10 different packs. That year, hunting concentrated on packs with a confirmed history of livestock kills.

After the death of numerous research wolves, though, shot just outside park boundaries as they entered Montana, conservationists sued; A federal judge reinstated their federal protection, halting the hunt. But, in 2011 Congress again delisted the wolf and the hunt was back on.

Wolves aren’t the only reason Yellowstone has been in the news. In June 2016, four Canadian men were arrested after posting photos of themselves trampling delicate hot springs; an Oregon man died after he trespassed and slipped into a boiling, acidic spring; and a Chinese man was fined $1,000 for breaking through the fragile crust around Mammoth Hot Springs to illegally collect spring water.

Then this April, the U.S. Interior Department Office of Inspector General issued a report dealing with allegations of on-going sexual harassment centered on the YNP’s Maintenance Division.