Why Are NPS and the Feds Incapable of Cleaning House? 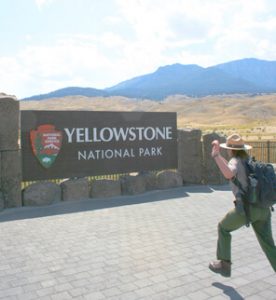 In House Oversight Committee hearings this summer, ranking Democrat Elijah Cummings looked back and forth across the panel, to his left and right, and across the hall, wherein sat or had sat National Park Service Director Jon Jarvis, Deputy Director Michael Reynolds, and various National Park Service whistleblowers who had traveled to Washington, DC, to relate sordid tales of abuse inflicted by Park Service higher ups upon innocent victims. Cummings searched for someone who had served on the committee as long as he had, someone who could remember sixteen years ago when similar grievances had been brought before the Committee. He found no one, they were all relative newcomers compared to Cummings, even pitbull Jason Chaffetz of Utah, Chairman of the Committee, and a Republican, who joined his colleagues in unanimous bipartisan condemnation and disgust at the testimonies they had heard about abuse and degradations in the nation’s parks. But Cummings’ point cut more deeply, that being, that in 16 years nothing had changed—the Park Service and federal government in all that time had been unable to responsibly manage itself so that women enlisted to employment at NPS, expecting to find professionalism and standards of ethics, repeatedly found that they were propositioned for sex, and that when they rebuffed the advances, they suffered reprisals, often degradingly so.

With a whistleblower from Livingston having come forward in September, and blown the matter wide open pertaining to Yellowstone, where such misconduct has allegedly been taking place for years also, federal investigators with the United States Interior Department Office of Inspector General descended upon the small town, in September, and again in October. We received several calls here at this office from both Congressional and OIG investigators, and on Oct. 18 from OIG’s Program Integrity Division. And we received a call from another alleged victim, who told us that during the span of her career at Yellowstone, which ended in 2004, she had been victimized and suffered reprisals, by the very same actors who 12 years later were alleged to have abused and exploited women for sex according to the more recent whistleblower. And we learned others also came forward.

In other words, with impunity, year after year, the same perpetrators allegedly committing the same crimes kept their jobs, kept on victimizing, and they kept their salaries and pensions.
Oversight Committee members and NPS employees are disgusted and outraged. It seems beyond comprehension that a federal agency cannot simply police itself and ensure that its people can show up for work and pursue their careers under healthy working conditions. And the questions looms—will the results this time be different? Will the guilty by punished?

On a recent visit to Yellowstone National Park, and at the August 25 Centennial celebration in Gardiner, we noticed the pride and sense of honor exuded by Park employees for having the privilege of working in one of the most glorious and admired places on earth. Their pride and professionalism is palpable, and indeed the pride we feel in Montana, and across the country, for Yellowstone and great parks like Yosemite and Grand Canyon, strikes to the core of what we believe America to be. They are majestic physical representations of our patriotism. Yet, at the Centennial, with all the speechmaking and capitalizing on these truths, the exploitation of these sentiments in order to plead for more funding, more money, we have a Secretary of Interior (Sally Jewel), a National Park Service Director (Jon Jarvis), and a Superintendent of Yellowstone, (Dan Wenk), who have somehow been unable or unwilling to right the ship, and, as Elijah Cummings insisted, see to it that people going to work in our National Parks feel safe.

This sexual harassment scandal in Yellowstone National Park (which erupted on montanapioneer.com, after the courageous testimony of a local whistleblower) has now reached across the nation, and into Congress, with the help of the Associated Press, the Washington Post, the Denver Post, NPR, NBC, and so on. But the headlines will fade, and the outcome and consequences will still rest with a federal government that proved incapable in the past of cleaning house and correcting the problem.

When asked in the September 22 House Oversight Committee hearing, Deputy NPS director Reynolds said he could not point to one single firing that had resulted after two dozen cases of sexual harassment at our National Parks. Not one. Nor could Director Jarvis, who sat so smug and impervious in the June hearings as if epitomizing the vulgarity of corrupt, unresponsive bureaucracy.
We should emphasize that the term sexual harassment has probably become inadequate in describing the actual actions of the NPS supervisors that Jarvis and others have covered for. The term does not convey the degradations, the humiliation, or the financial and professional damage that come with reprisals. Nor does it contain the full import of corruption that can take place within certain areas of the Parks, another story that must be told.

One would expect, that after a thorough investigation by OIG, which has been reportedly turning things upside down at the Yellowstone maintenance division, heads will roll. But one ought not expect that, and perpetrators have sought comfort in that fact for years and been incentivized to allegedly continue extorting sexual acts from women as a condition of employment. The strategy of the Park Service Director, certain Superintendents, the Interior Department, and it would seem the federal government itself, has been to dodge, cover, and at best transfer guilty parties to other jobs in the Park Service.

We are informed that hiring has been transferred to the NPS regional office in Denver to mitigate practices associated with the scandal. But a more effective measure is needed, one imposed from outside and that requires the moral leadership of the White House, so far invisible, and perhaps legislation by Congress:
Fire the perpetrators, cancel their pensions, prosecute them criminally.

Doing so would send an immediate shock wave across NPS, and the entire federal government, and corruption would be seriously disincentivized.

Trouble is, in the present climate, in which the Department of Justice turns a blind eye to criminality due to partisan politics, including wholesale destruction of evidence by the former Secretary of State, and as criminal behavior at the highest levels goes unpunished, absent a political revolution, we see no reason to expect that in the next four years anything will change.