Up in the Missouri River Territory, This Is How She Rolls 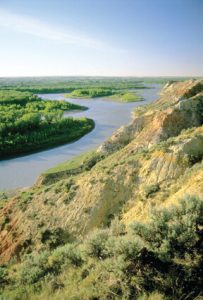 The Yellowstone River, near Sidney, Montana. Photo by Rick/Susie Graetz

Gathering some of the finest mountain and prairie topography on the planet, Montana’s Yellowstone drains a 70,000-square-mile piece of the West in grand fashion. Once serving as “a moving highway” into the wilderness, this unique river flowed through the passage of millions of bison, the travels of the Corps of Discovery, the creation of the nation’s first national park and the foundations of a state.

Long stretches haven’t changed since the Yellowstone’s not-so-long-ago yesterdays, and much of the water continues to surge through clean space. Human presence has grown along the river, but for the most part it is unobtrusive.

The towns of Savage and Crane create small human outposts along a 15-mile stretch of the Yellowstone. Historical notes show Savage, which benefited from the irrigation project, was named for H.M. Savage, a railroad official. The town of Crane, close to Sidney, was titled after the owners of the Crane Ranch. Upstream from Savage, in 1909, a diversion dam was built for the Lower Yellowstone Irrigation Project. When the work was completed, there were nearly 400 miles of canals and ditches carrying Yellowstone River water to croplands, including widespread sugar beet fields.

From Savage to Sidney, the river provides a popular floating stretch amid the Elk Island and the Seven Sisters Wildlife Management areas and the state-owned Crittenden Island. Elk Island, actually three islands in high water and one in low flow, is near Savage, while Crane provides access to the seven small islands named Seven Sisters that legendary Yellowstone steamboat Captain Grant Marsh titled in honor of his siblings.

Floating from Elk Island to the Seven Sisters is a great way to see this special length of the Yellowstone, home to whitetail and mule deer, upland game birds, ducks and geese and other wild critters. It takes from five to seven hours to cover this 12-mile stretch of water. Experienced “river rats” recommend paddling hard once you put in at Elk Island in order to get into the more scenic right-hand side channel. And since the river moves slowly here, sightings of eagles, blue heron and all manners of birdlife are a strong possibility.

On August 2, 1806, Capt. William Clark wrote about this segment: “river wide and very much divided by islands and Sand and Mud bars…Saw emence numbers of Elk Buffalow and wolves to day…passed the enterance of Several brooks on each Side.” Clark was most likely describing Elk Island and the Seven Sisters.

The river from Savage downstream, with its wide bottoms crowded with islands and sandbars and cottonwoods growing in profusion, still looks very much as Clark depicted it. From the town of Intake forward, the terrain on the river’s east side becomes rugged. Badlands and river breaks intermix and ascend well above the floodplain. Juniper, small ponderosa pine and green ash give a warm color to a harsh soil.

Agates are another lower Yellowstone River attraction. Millions of years ago, volcanoes ruled Montana east of the mountains. Powerful eruptions of molten lava and ash covered and destroyed hundreds of miles of forests. After centuries of activity, the climate cooled and rain washed silica and minerals from the surface of the land down into the labyrinths of hardened lava beds, filling the nooks and crannies with what several eons later would become Montana agates.

In those unstable geologic times, mountains were being born and layers of buried lava broken up. Driving rains eroded the debris, washing it into the lower country. The Yellowstone River is the recipient of a magnitude of the alluvial gravel, and mixed among the rocks and stones are beautiful agate treasures waiting to be found.

The bustling town of Sidney is about a mile west of the Yellowstone and about 14 river miles short of its marriage to the Missouri. Named in 1888 for Sidney Walters, the young son of a local pioneer family, locals like to call it the Sunrise City, as this is where the sun first greets Montana. A pleasant community dotted with expansive tree-lined city parks, it is the largest town in northeast Montana. Sugar beets, wheat, ranching and oil provide the dollars, and the exhibits at the highly acclaimed Mondak Heritage Center provide reminders of the rich, historical past.

Between Sidney and Fairview, the valley of the Yellowstone spreads out in a display of agricul-tural artwork. At times looking like a billowing patchwork quilt, green fields of sugar beets are interspersed among squares of yellow wheat. Hay bales in various shades of gold scattered across the countryside give the scene definition.

A few river miles north of Sidney, the Yellowstone crosses the North Dakota line, then abruptly changes her mind and rushes back into Montana. Finally, about two miles west of the border, the fabled Yellowstone bids Montana adieu, turns toward North Dakota and stays on track for the Missouri.

Some of Montana’s earliest recorded history was played out in this “Confluence Country,” here on the eastern fringes of our state where the Yellowstone ends its run. On April 27, 1805, the Corps of Discovery, after having spent a few days at the joining of the two rivers, first entered what would become Montana Territory. From about 1828 until 1867, the stately Fort Union held supremacy over the fur trade business of the Upper Missouri.

Originally built in 1828 by John Jacob Astor and his American Fur Company, Fort Union was located about six miles up the Missouri from the Yellowstone. A handsome—some would say royal—place, it attracted famous men of the day. When the Fur Trade Era ended in 1867, the fort fell into disrepair. Much of the material was moved to aid in the expansion of Fort Buford, a military post closer to the Yellowstone’s confluence. Steamboats churning up the Missouri used what wood was left to feed their hungry boilers.

Today, the Fort Union Trading Post National Historic Site has been reconstructed into an exact replica as it was in 1851, and due to the natural reconfiguration of the rivers, it is actually about three air miles up from the joining of the waters. For anyone interested in the fabled Missouri and Yellowstone rivers, this historic site should be on your trail.

The geographic history of the Yellowstone-Missouri Confluence is also worthy of note. The original site of the uniting of the rivers the Corps of Discovery witnessed is about two miles to the southwest of the current junction. A huge 1930s flood forcibly moved it.

Three miles from the eastern edge of Montana and Fort Union, the big, wide, silt-laden Yellowstone gives up her independence to the Missouri, together forming one very formidable river. Under the flag of the Missouri, it lunges toward a rendezvous with the Mississippi River.

Rick and Susie Graetz teach at the Department of Geography, University of Montana.