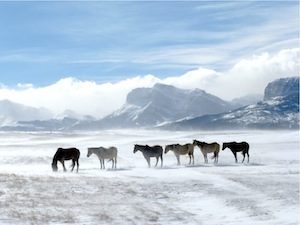 While the month of March figures officially as winter in Montana, even as hints of spring linger in the air, the coldest weather of the season has come and gone. And it’s worth pointing out that the national record for cold in the lower 48 states—70 degrees below zero—was documented right here in Montana at 2:00 a.m., Jan. 20, 1954, on the west side of Roger’s Pass near Helena. It’s also worthwhile to mention that the chilliest time of any day is just prior to sunrise, so there’s a good chance that by 6:00 a.m. it was significantly colder that day in 1954, but minus 70 was the thermometer’s lowest mark. So we were close to and may have even have tied the U.S. national record of negative 80 established at Fort Yukon in Alaska. On the flip side of the coin, consider that both Medicine Lake and Glendive have recorded 117 degrees above zero for our toastiest temperatures ever. While we are looking at temperatures, it’s interesting to note that Cooke City on the southern fringes of the Beartooth Mountain Range boasts Montana’s coldest average temperature on a year-round basis, while Westby, hard up against the Dakota line in the far northeast corner, clocks our coldest average winter temperatures. Conversely, Fort Smith in Crow Country south of Billings lays claim to both the warmest average winter temperature and the warmest mean for the year. The record snowfall for one storm in the state is 77.5 inches recorded at East Glacier. Nearly four feet – 44 inches to be exact – of the fluffy white stuff fell in 24 hours at Summit just west of there. We suspect many places in Montana’s high country have received much more snow in a day or from a storm, but evidently no one was present to record it. Contrary to popular belief, a chinook wind, that welcome respite from far below 0 winter temperatures, cannot cover the entire eastern two-thirds of the state. Born above the crests of the Northern Rockies, especially along the Rocky Mountain Front, these warm winds extend only about 100 miles to the east before playing out. Balmy winter breezes that sometimes blow in the far eastern reaches of the state are just simply that and not a bona fide chinook. Livingston and the Rocky Mountain Front are Montana’s two windiest locations. Without getting into the complications of meteorology, we can tell you that as air rises on the west side of the mountains, it descends on the east slope with great force. The mountains interact in such a way as to funnel or channel these winds through favored gaps. While the descending wind seems cold because of its force, it’s actually much warmer than it was when it first started out. Dry air heats at a rate of about 5.5 degrees per thousand feet of drop. The same factoid might be taken into consideration when one climbs a mountain. As you ascend, the dry air (we assume you won’t plan your climb when it is wet) cools at the same pace. Moist air cools or heats at about a 3.5-degree clip per thousand feet in gain or loss. Did you know that a couple of the counties in the northwestern part of the state are 90 percent forested? Compare this to some of the landscape in the far southeastern corner of Montana, where perhaps less than 5 percent of the land has tree cover. Montana has 67 distinct mountain ranges. And if you add all the sub-ranges, there are actually 131 of them. The five highest in descending order are: the Beartooth, the Madison Range, the Crazy Mountains, the Absarokas and the Pioneers. Six ranges within the state — the Beaverhead portion of the Bitterroot Range, as well as the just mentioned five — have 11,000-foot peaks within them. Incidentally, Granite Peak at 12,799 feet is our highest. In Rick’s younger days of climbing, he and a few friends added a foot-high rock to the summit to try and even out elevation to 12,800, but the U.S. Forest Service wouldn’t buy it. In all, 13 ranges in the state have peaks 10,000 feet and higher. The Absarokas win the jackpot by having 166 of them. Rick and Susie Graetz teach at the University of Montana’s Depart-ment of Geography.